The largest North American rodent, the beaver is indeed an active woodcutter and dam builder. But when beaver populations get too high, they cause problems by cutting down valuable trees and flooding roads with their dams. Beavers also spend a lot of time in the water, using their tails as rudders and propellers when swimming.

The beaver is a perfect example of animal adaptation--in this case to an aquatic environment. Nose and ear valves shut as the animal submerges, an nictitating membranes--similar to those of birds-- serve as natural goggles to protect the eyes from irritation. Meanwhile, the lips close behind its front teeth, enabling it to carry a branch in

its mouth without drowning. Beaver can remain submerged as long as 20 minutes. The beaver uses its broad, scaled tail as a rudder when swimming and as a sturdy prop on land.

General description: The beaver is a large rodent that has large orange teeth and a flat paddle-shaped tail. The pelt of beaver is composed of long, coarse guard hairs over a thick, wooly undercoat. It is this luxuriant pelt that lured early trappers and voyageurs to Minnesota and actually led to the early exploration and settlement of our state.

Length: May attain a length of five feet; 35 to 40 inches is typical. 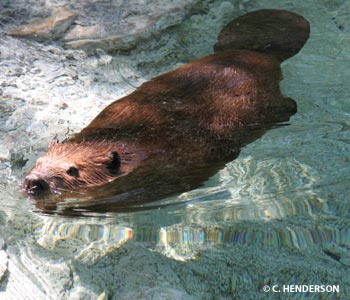 Beavers mate when they're two years old. The mating season runs from November to March. Young beavers (kits) are born in May or June, with an average litter of 3 to 4. Beaver babies weigh less than a pound, but will follow their mother underwater before they're a day old. Beavers live on their own at age two, and have an average life span of 12 years.

In spring and summer, beavers eat leaves, buds, twigs, fruit, ferns, stems, and the roots of water plants. In fall and winter, they eat cuttings from trees stored beneath the water.

The beaver is nature's original water conservationist and land and wildlife manager. Many biologists believe that the beaver pond supports a greater variety and abundance of wildlife than any other ecosystem in the forest. The ponds also control spring runoff, thus lessening the possibility of downstream flooding.

But as one biologist said, "A beaver in the wrong place is a nuisance. In the right place, he is an ideal conservationist." Beaver now occur in every Minnesota county. Wherever they have become too numerous, they cause problems for people. Their dams flood farmlands, roads and timber, and their penchant for chewing wood has resulted in the loss of valuable fruit and shade trees.

In its range, there are 0.6 beaver colonies (less than one) per river mile. During the winter, a beaver colony will include the two adults, their spring babies, and often year-old beavers. Minnesota has a regulated beaver trapping season, but there are not enough trappers to keep some beaver populations small enough to prevent problems. Beaver are valuable, especially when considering their economic importance for fur. Minnesota trappers take 20,000 to 30,000 surplus beaver most years. The beaver is a renewable resource. In contrast, synthetic furs are made from nonrenewable resources, primarily petroleum.

With their strong jaws and teeth, beavers can chew through a six-inch tree in 15 minutes. A single beaver can chew down hundreds of trees each year.