The bison or buffalo once thrived on Minnesota prairies. However, by 1900, settlement and slaughter by market hunters and the U.S. Army combined to reduce buffalo numbers to a handful of captive bison.

General description: A mature bull may stand five to six feet high at the shoulder, measure nearly ten feet in length, and weigh more than 2,000 pounds. Cows are smaller, weighing about 1,200 pounds.

Color: Bison are dark brown, but their heads and shoulders are almost black. Thick, shaggy hair covers their shoulders, neck, forelegs, and massive head. Curving outward and upward from the head are sharp horns. Both males and females grow horns.

A grazing mammal, the bison feeds almost entirely on grasses.

It is considered extirpated in the wild. 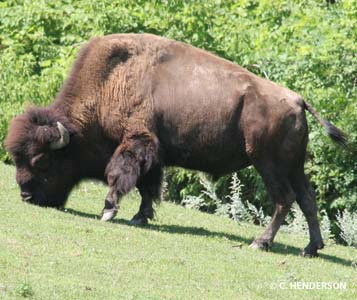 Bison are at risk because of habitat loss and bison-cattle hybrid experiments by early ranchers and conservationists. Of the nearly 500,000 bison in North America today, less than 5 percent of tested bison show no signs of cattle DNA present. Without more land returned to prairie, there just isn’t enough grass to grow more bison. To fight against these two problems the Minnesota Department of Natural Resources has partnered with the Minnesota Zoo to raise and manage a herd of bison with the healthiest genetics possible called the Minnesota Bison Conservation Herd. Today Blue Mounds State Park, Minneopa State Park and the Minnesota Zoo have bison herds that you can visit.

The hump behind a bison’s head is not made of fat but of muscle. Here the backbones (vertebrae) can be over a foot long and provides a place for muscle to attach to. This muscle helps push the bison’s wide head through snow and ice to find food in the winter. 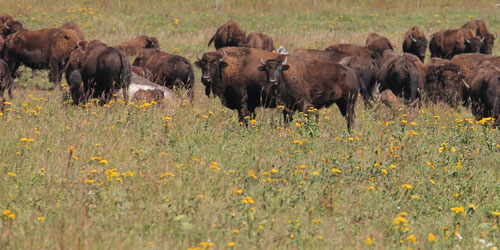