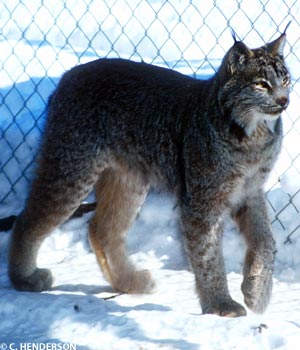 The Canada lynx is a rare wildcat in Minnesota, and is most likely to occur just after the population of their main prey, snowshoe hare, crashes in Canada. The lynx has large "snowshoe" like feet that enables it to walk on top of deep, soft, snows.

General description: About the same size as a bobcat, but with brown fur with white undersides, long ear tufts, and a pronounced goatee under the chin. The hind legs appear longer than the front legs.

Length: About 3 feet, including the four-inch stub tail.

Color: Adult lynx are brown to gray on top, with a gray to white belly. Some lynx have dark spots.

Mating occurs in late winter, and from one to five kittens are born 65 days later. In years of low or average snowshoe numbers, few or no kittens survive, but when hares are abundant, kitten survival is very high. Kittens stay with their mother for one year before dispersing to their own home range. 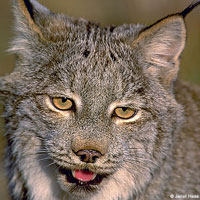 Being a large predator itself, lynx have few predators, but lynx have been killed by wolves, fishers, bobcats, and coyotes.

Lynx live in dense forests across northern Canada, in northern Minnesota and Maine, and in mountainous areas of northwestern United States.

The lynx was once a hunted and trapped in Minnesota, but due to declining numbers in Canada, the lynx has been protected in Minnesota since 1984. In 2000, the U. S. Fish and Wildlife Service classed the lynx as a federally threatened species.

Both lynx and snowshoe hares have large feet, for walking on top of deep snow.