The cottontail is one of the most common small mammals in Minnesota. This rabbit is seen throughout the state, especially in semi-open areas that have thick, low cover such as brush piles and hedges. The cottontail is a favorite food of many predators.

General description: This small grayish-brown mammal has a white (cotton-colored) tail and a rusty patch on the back of its neck. Its belly, chin, tail and inner legs are white.

Sounds: None, except a high-pitched squeal when it is attacked. 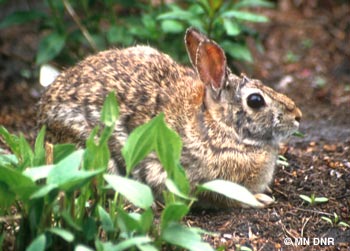 The cottontail is a prolific animal. A female may give birth to a litter of four to six young and within hours after giving birth, be bred again. Three weeks later she will have another litter. The young of the first litter fend for themselves when the second litter arrives.

Rabbits are hairless, sightless, and virtually helpless at birth. They weigh about an ounce at birth and are no bigger than a person's thumb. To keep them warm, the mother digs a shallow saucer-shaped nest in the ground and lines it with grass and her own belly hair. Baby cottontails leave the nest after three weeks.

Throughout the year, cottontails are found in brushy areas such as woodlots, shelterbelts, and even around shrub and conifer plantings in suburban areas. During summer they feed on grasses and clovers, but in winter they eat twigs and bark, especially of fruit trees. Large tree and brush piles are popular shelters for rabbits. The range of one cottontail is no more than five acres (about the size of four football fields). They run along trails within thick brush to escape predators.

Cottontail hunting is a popular sport in Minnesota -- in fact, it is the number one game animal in the U.S. During the 1999-2000 season, Minnesota hunters harvested about 60,000 cottontails. Each year about 80 percent of the Minnesota's cottontail population dies from weather, predators, or disease. The remaining 20 percent have little trouble repopulating the landscape.

Cottontails are nervous animals that may die of shock if handled or caged. Cottontail meat is tasty favored by gourmet chefs who often cook it fried, in stews, or braised with herbs and vegetables.