Length: The southern species is about nine inches long, while the northern species measures almost 11 inches, including the wide flattened tail which is nearly half as long as the flying squirrel.

Color: The upper parts are gray-brown, whereas all the lower parts including the tail are white.

Flying squirrels eat a variety of fruits and nuts, insects, small birds, and meat scraps. Flying squirrels are frequent visitors at bird feeders, and some people have lights at the feeders so they can watch the flying squirrel's antics at night. 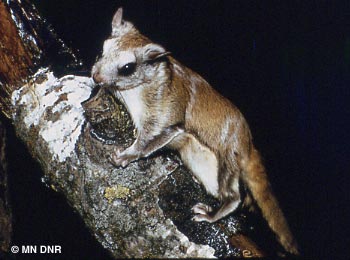 Flying squirrels, though unprotected in Minnesota, have no meat or fur value and thus are not hunted or trapped. Some management occurs when old trees or "snags" with cavities are left in logging operations.

Though seldom seen, flying squirrels are interesting animals. With their loose fold of skin (called a patagium) stretched between all four legs, they are able to glide considerable distances under full control. Many people who think they see birds flying across highways at night actually are seeing flying squirrels. Flying squirrels do not hibernate, but slow their body activity in winter and sometimes nest in groups to stay warm.