The fox squirrel is Minnesota's biggest tree squirrel. Some get so big they look like an orange cat in a tree. Fox squirrels are found in most of the state, except in the extreme northeast. These squirrels are not as agile as red or gray squirrels. They sometimes fall from trees but rarely get hurt.

The eastern gray squirrel and eastern fox squirrel are among the most sought-after small game animals in Minnesota.

General description: This orange-gray mammal is found in open woodlands of cities, towns and countryside.

Color: Fox squirrels vary in color from dark orange to orange-gray. The top of its ears are lighter in color than the rest.

Sounds: They chirp and whistle, especially during the day.

Fox squirrels mate twice a year, typically from December to February and June through July. They nest in hollow trees or in a tree-top den, which is a 12- to 19-inch ball-shaped nest made of leaves, twigs, and bark. Mother squirrels have two or three babies, which are born hairless and weigh 1/2 ounce. Young squirrels are independent within 12 weeks.

Nuts are the fox squirrel's primary food. But it also eats corn from fields or cribs, as well as maple seeds, mushrooms, seeds of evergreen (conifer) trees, acorns and even garbage. 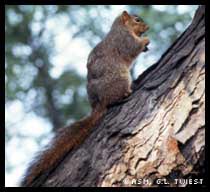 Fox squirrels live in open woodlands, shelter belts, parks, and residential areas. They are most common in the western part of the state.

Minnesota has a strong population of fox squirrels. Each year, Minnesota hunters harvest about 160,000 of these rodents.

The fox squirrel sometimes hunts for food when the sun is high, but it typically eats later in the evening.