Lemmings and voles have short tails and legs, small ears, and beady eyes. These little mice eat vegetation, especially grasses. You may never see them, but you might happen upon their trails. These tiny creatures spend the winter on the ground surface in the layer of vegetation compressed by the snow. With adequate snow for insulation, they live in 32 degree F temperature. Without the cushion of deep snow, they may perish.

In spring, after the snow melts, their trails resemble narrow tunnels along the surface where mice have eaten through grain or grass stubble. You may also see little round grass nests, evidence that voles were active just below the snow blanket.

The southern bog lemming of our evergreen forest region and the northern bog lemming, found in the northwest, live in damp, boggy places. The red-backed vole, of wet forested areas in much of our state, will climb trees, unlike any other vole. The heather vole (pictured), typically a Canadian species, has recently been recorded in northern St. Louis County.

The meadow vole is the most widespread and is common all over Minnesota. The rock vole, which has a yellow nose, is found only in the far northeast, and the woodland vole only in the far southeast, where it spends most of its time underneath leaf litter. The prairie vole is found in rather dry situations in the southern half of the state.

Lemmings and voles seldom weigh more than one to one and one-half ounces. All nest in the ground, or under rocks or logs. These tiny little creatures may seem insignificant in nature's scheme of things, but are the key to survival of many wild predators including weasel, foxes, and birds-of-prey.

Old world rats and mice are represented in Minnesota by the brown rat (Rattus norvegicus) and the house mouse (Mus musculus). Both species are capable of producing several litters a year and are notorious for damaging property. 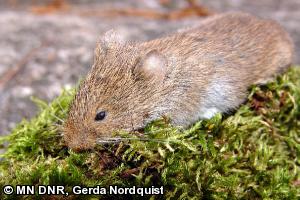 Unlike most other mice, the meadow jumping mouse and the woodland jumping mouse are hibernators. Small (one-half to one ounce), with extremely long tails and hind legs, both species eat insects, seeds, and fruit. Both have internal cheek pouches to carry food in. They are rather brightly colored, yellowish above, white below, but the woodland species has a white-tipped tail. A rare mouse in Minnesota is the plains pocket mouse (pictured).

The tiny western harvest mouse looks like a house mouse. It lives in grassy and brushy areas of southern Minnesota. Here it usually makes a little round nest on the ground. Occasionally, it may attach its nest to vegetation several inches above the ground. The harvest mouse eats seeds and insects.

The deer mouse and white-footed mouse are very similar. Both have large eyes and ears and rather long tails. They nest almost anywhere, in ground burrows, tree holes, old bird nests, and buildings. Deer mice occur throughout Minnesota, while the white-foot is absent in the northeast. Their foods are seeds, nuts, and insects. They can be a nuisance to campers and cottage owners, though they are interesting to watch. Individuals of both species may weigh up to one and one-fourth ounces.

Like a husky deer mouse with a short tail, the northern grasshopper mouse is a lion among mice, eating insects, other mice, lizards, and even small birds. It thrives on western prairies, usually living in burrows of other animals. 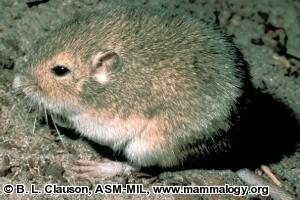