The moose is Minnesota's largest wild animal, and Minnesota is one of the few states that have moose. The largest member of the deer family, averaging 950 to 1,000 pounds and sometimes exceeding 1,200 pounds. Its antlers sometimes measure five feet across and weigh up to 40 pounds.

Moose have rather poor eyesight, but acute senses of smell and hearing. They have long legs and splayed hooves which enable them to move easily in marshy areas and along northern Minnesota streams and lakes where they browse on aquatic vegetation and on various types of willows and shrubs along shorelines. Moose are quite capable of diving to the bottom of shallow ponds and lakes, where they rip up bottom-growing vegetation.

Though they appear formidable, moose are seldom aggressive. Exceptions are a cow that feels her calf is in danger, or a bull in rut.

General description: Dark brown to black. The front shoulder hump and flap of skin hanging below the throat (called a bell) are characteristic of mature moose. Bulls carry flat, palmated antlers which begin growing in April and are usually shed in December and January.

Length: Its body is nine to 10 feet long; at the shoulders, it stands six to six and a half feet. 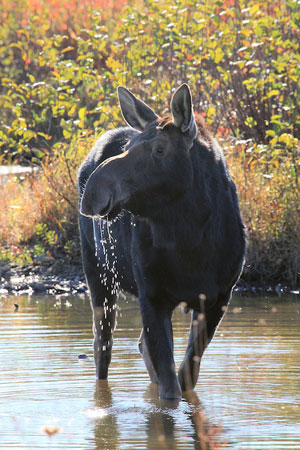 Rutting or mating season occurs from mid-September to mid-October. ln May or June, cows give birth to a 25- to 35-pound calf. Occasionally two calves are born. The calves remain with their mothers for 12 to 18 months. Within a week after birth, newborns are strong enough to walk and swim.

Moose eat aspen, maple, and cherry trees and many kinds of water plants.

Wolves and bears hunt moose. Some people hunt moose for their meat and hide.

The best moose habitat occurs in young forests created by logging, forest fires and windstorms in northeastern Minnesota. They also live in a mixture of woodlots and farm fields in northwestern Minnesota. During early summer, moose feed on water plants in ponds and along lake shores.

A moose can store more than 100 pounds of food in its stomach. Moose can run 35 mph and easily swim 10 miles without stopping. An adult moose weighs as much as four or five full-grown white-tailed deer. 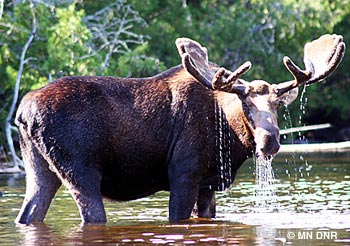