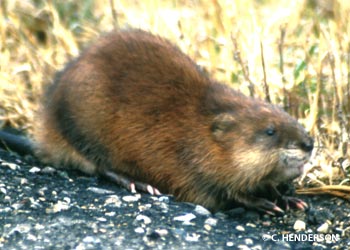 The muskrat is not really a rat, but it is a common herbivore (plant eater) of Minnesota's wetlands. The muskrat and its bigger cousin, the beaver, are the only mammals that actually build homes in the water. That is where they spend the winter and raise their young.

General description: The muskrat swims low in the water, with its long, almost-hairless tail curling behind. Often, the muskrat can be seen carrying aquatic vegetation as it swims.

Length: The muskrat is about 20 inches long, including its 9-inch tail.

Weight: Adults weigh from 2 to 5 pounds.

Color: The upper body is reddish brown, while the under parts are grayish brown.

Muskrats produce many young. An adult female can have two or three litters of up to 10 young each summer. The young weigh about one-half ounce at birth, but grow rapidly and can live on their own after only one month.

Muskrats eat the roots, stems, leaves, and fruits of a many water plants, such as cattail, wild rice, water lilies, and rushes. Even though the muskrat is mainly a plant eater, it also eats small fish, clams, snails, and even turtles.

The muskrat's main predators are mink and otters. Some raptors (bird predators) such as eagles and ospreys will attack swimming muskrats. When on land, muskrats are vulnerable to predation by foxes, coyotes and raccoons.

The muskrat is found throughout of Minnesota. It lives in marshes, ponds, and streams that have many water plants. Several hundred muskrats can live in a single wetland. Although famous for its domed houses of mud and vegetation, it just as often lives in burrows.

A valuable furbearer, the muskrat provides income for trappers of all ages. Trapping, of course, helps to keep these prolific animals in balance with their habitat. Muskrats have several litters each season. If they become overly-abundant, they may create problems by digging holes in dikes and dams or tunneling out bank dens along lake and river shorelands.

Unlike the beaver, the muskrat does not store food for the winter. It needs to eat fresh plants each day, and sometimes it makes channels in the mud to get from its house to reach food under the ice. To stay warm in winter, groups of muskrats huddle together in their lodges.