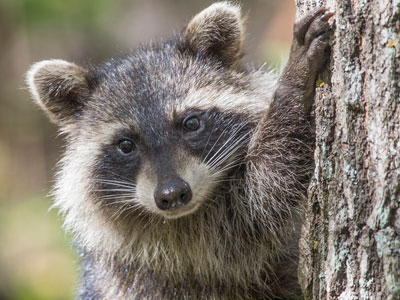 The raccoon's antics and its appealing face make it a favorite of some and a villain to others--especially to someone whose cornfield has been raided. These excellent climbers and swimmers thrive in almost any environment and eat everything from crayfish to corn--not to mention garbage. Raccoons are most active at night. During the day they can sometimes be spotted sunbathing in trees.

General description: Raccoons are the size of a small dog and have heavy fur streaked in brown, black, and gray. They have bushy ringed tails and their paws make hand-like prints in the mud or snow. Their black eye stripes resemble a mask.

Weight: They average between 15 and 23 pounds or more at maturity.

Sounds: Raccoons hiss and growl and screech like an owl.

During the mating season, February to March, the male raccoon travels long distances and mates with many females. After a 63-day gestation period, the female has her litter, which numbers from two to six young. They find shelter in either hollow trees or dens (woodchuck burrows, culverts, under buildings). Once they reach four to six months old, raccoons live on their own.

Sweet corn is a favorite food, though crayfish, frogs, insects, fruits, and bird eggs are staples in its diet.

The raccoon occurs throughout the state, except in the three northeast counties. Their habitat includes prairies, woodlands and cities. 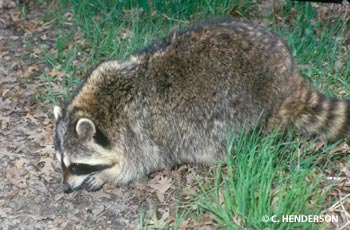 A raccoon is a powerful fighter that can kill an attacking dog twice its weight.

Raccoons remain in partial hibernation during most of the winter. The animals often den together in small groups. One woman found 23 raccoons sharing an abandoned house in Swift County. Some raccoons may winter in wood duck boxes if the entrance hole is large enough to squeeze through.