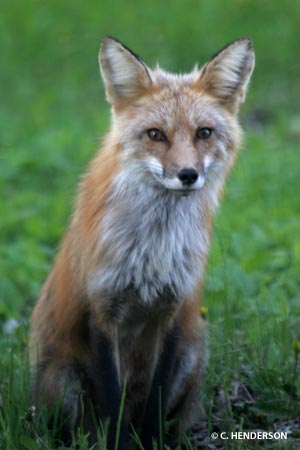 The red fox is common across Minnesota, even in the Twin Cities and suburbs. This reddish-colored animal is a cousin to the dog. Foxes live in ground dens or brush piles and are particularly active at night.

General description: This is a medium-sized predator (meat eater) often seen running quickly across fields or through woods.

Size: The average size of an adult fox is 15 to 16 inches tall at the shoulder. It is about 3 feet in length, with a 13-inch tail.

Color: Well-known for its rusty-red coat, white-tipped bushy tail, and black legs, ears and nose. In Minnesota, there are several different color variations including nearly solid black, silver-black and red bisected by dark bands across the back and shoulders (called a cross fox).

Sounds: Red foxes bark much like dogs, and will sometimes scream when alarmed.

Red foxes mate in February, and 52 days later 5 to 10 young (called pups) are born. The pups nurse for 10 weeks and are fully independent at seven months. Foxes reproduce at age one.

They often den up in woodchuck or badger holes. Dens are usually found in dense woods. Most dens are quite deep--up to 40 feet. The den, however, is little more than a nursery because fox prefer to sleep in the open, even during winter.

It is an opportunist that eats rats and mice, rabbits, ground squirrels, birds, snakes, fish, insects, berries nuts, and seeds. A fox will often hide uneaten food under litter or bury it in a hole to be eaten later.

Red foxes compete for space with coyotes, which will kill foxes.

Red foxes live throughout Minnesota in many types of habitat, ranging from mature forest to open fields. They range over about two square miles, depending on how far they need to travel to find food.

Red fox tend to be solitary animals, and always hunt alone. The fox may be active day and night but appears to hunt most during twilight and evening.

The red fox is the most common predator in the state. Hunters and trappers harvest up to 100,000 each year, but the fox population remains strong. A disease called sarcoptic mange sometimes kills thousands of red foxes.

The red fox runs 30 mph, and can leap 15 feet in a single bound--farther than a kangaroo. It is one of the few predators that store food items for future use. 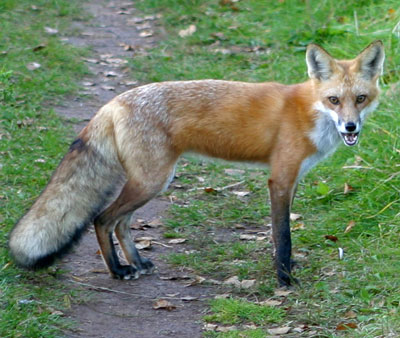