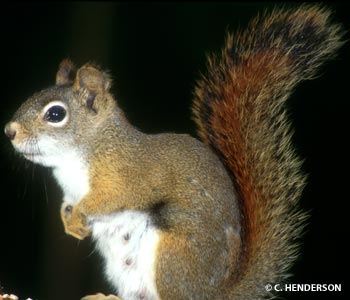 Less than half as large as the gray, this noisy little squirrel is Minnesota's smallest tree squirrel. It is found in every county of the state, but is most common in evergreen (conifer) forests.

General description: The red squirrel is rusty red above, with a whitish belly, gray sides, and ears that are tufted in winter. It is noted for its bright eyes, perky disposition, and chattering, rattling call. 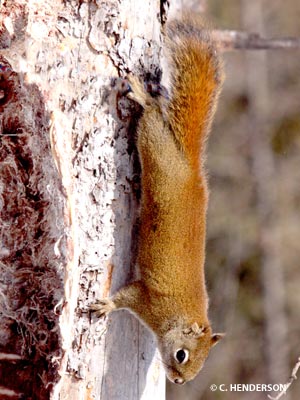 Color: White belly and a top coat that is dull reddish gray in the summer and orange-red when colder weather arrives.

Sounds: Red squirrels are very vocal. They often chatter and whistle when humans are nearby.

Red squirrels mate in late winter. They nest in hollow trees or build a 12- to 19-inch ball-shaped nest in a tree top using leaves, twigs and bark. In early spring, females have two to five babies which are born hairless and weigh less than an ounce. The young squirrels are independent within 12 weeks.

Squirrels eat the seeds of various conifers, acorns, mushrooms, hickory nuts, walnuts and maple seeds. After eating, its not uncommon for red squirrels to leave piles of shredded cones, husks and hulls more than a foot high. It commonly buries nuts and seeds, either in small piles or singly, for use on winter days.

Red squirrels live throughout our nation's snowbelt, in mountainous regions and Canada. It is most associated with coniferous woods but hardwoods and thickets, even in the northern prairies, also provide habitat. A leaf nest, usually in a tree cavity or in a crotch of a tree, is its home.

During fall when they are gathering food, red squirrels may become covered in the gum that oozes from pine trees.