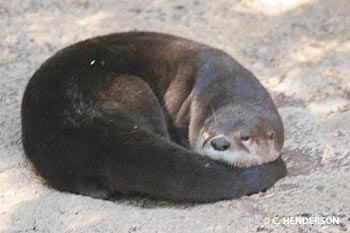 The river otter is Minnesota's largest aquatic carnivore that lives in most northern Minnesota lakes, ponds, and streams. It can swim and maneuver better than many fish, and swims with only the top of its head out of the water. After an absence of more than a century, its range is again extending into southern Minnesota.

General description: The otter is perfectly suited for an aquatic life. Long and sleek, it has short legs, webbed feet, and a long tapered tail. The fur is a rich brown, moderately short, and very dense.

Length: Adult river otters are about four to five and one-half feet long, including its 18-inch tail.

Weight: Adult otters weigh up to 30 pounds, though 15 to 19 pounds is average.

Color: The back and sides are glossy dark brown to black, and the underside, throat, and cheeks are gray-white.

As is common with members of the family Mustelidae, otters have a long period of "delayed implantation." Shortly after adult females have a litter of one to five young, they are bred and become "pregnant" for nearly a full year. The embryos do not begin development until about eight months later, and 50 days after that, the young are born. The cubs will remain with the parents through the first winter, but separate the next spring. 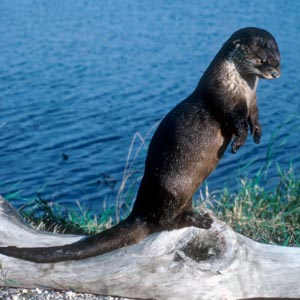 Otters eat a variety of small aquatic organisms such as fish, clams, muskrats, and turtles. They can also catch terrestrial mammals such as chipmunks, mice, and young rabbits.

Very few predators can catch an otter when it is in the water. However, otters on land can be killed by bobcats, coyotes, and wolves.

Early in the Twentieth Century, otter range was greatly reduced in Minnesota as a result of wetland drainage and pollution which destroyed habitat. Today, otters are common in all of northern Minnesota, and thanks to wetland restoration, are becoming more common again in southern parts of the state. Otters are tireless travelers. In a single week they may range as far as 25 miles.

Because the river otter has valuable fur and is relatively easy to trap, it is classed as a registered furbearer in Minnesota. This means that its trapping season is carefully controlled, and that each pelt must be registered with the Department of Natural Resources. About 2,000 otters are trapped each year out of a total population of 12,000.

Otters are playful, often wrestling or spending hours sliding down muddy or snow-packed stream banks. They also play by nudging sticks across the water, and by dropping pebbles to the bottom and retrieving them. Likely, all of this "play" helps the otter to hone its skills as a skilled predator.