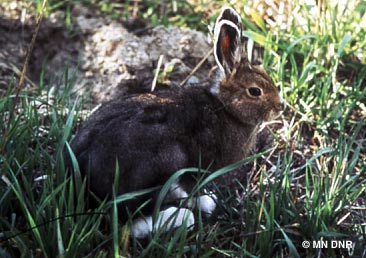 The snowshoe is slightly larger than the cottontail. It derives its name from the soles of its large feet which are well-furred, particularly in winter, enabling the hare to run on soft snow without sinking. The snowshoe hare is extremely fast and agile, reaching speeds of 30 mph and jumping 12 feet in a single bound. 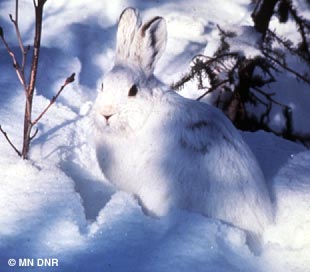 General description:A medium-sized member of the rabbit family whose coat is brown in summer and white in the winter. Snowshoe hares are typically found in young forests.

Length: About 20 inches long, with a two-inch tail.

Color: Brown in summer and white in winter.

Sounds: None, except loud screams when it is attacked.

Snowshoe hares mate from February to July, with birth coming 36 days later. One female can have three or four litters of up to four young each year. Hares nest in small depressions in the ground. Hares are precocial -- they are born with eyes open and a furry hide and they can hop about soon after birth.

In spring and summer, hares eat a variety of greens including grass, clover, ferns and garden plants. In fall and winter, they eat bark and the twigs of birch, aspen and conifers. In summer, the snowshoe eats succulent vegetation and in winter, slender twigs, buds and bark. It has also been known to nibble on the frozen carcasses of other animals and sometimes eat their own droppings, which provide them with extra nutrition.

The snowshoe hare is a northern species which thrives throughout much of Canada and even as far north as Alaska. In the upper half of Minnesota, it lives in dense woodlands and forest bogs. Hares spend their entire lives in an area of just a few acres.

The snowshoe hare population can rapidly rise and fall on a 10-year cycle. During high population years, researchers estimate there are about 3,400 hares per square mile. For example, hunters in the winter of 1980-81 harvested 286,000, and just 12,000 five years later after the population crashed.

In Minnesota, the snowshoe is dark brown in summer, matching the deep shadows of damp northern thickets. But with the coming of winter, snowshoe hares grow an entirely new coat that is as white as the snow around it. This is called a leucistic phase.