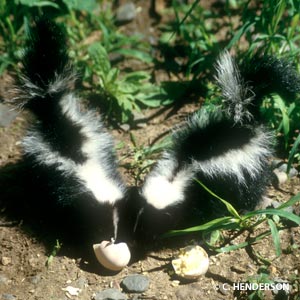 Every Minnesotan sooner or later gets a whiff of the striped skunk's calling card. The skunk is only the size of a house cat, but few wild animals are willing to tangle with the skunk and its obnoxious odor. Only the great horned owl is unruffled by the skunk's chemical warfare. The striped skunk lives--and thrives--in country and city environments. It can be found throughout Minnesota.

Skunks are intelligent and usually good natured. Despite their gentle manner, skunks can be deadly simply because they are often carriers of rabies. In fact, rabies is more common in striped skunks than in any other Minnesota mammal.

General description: The striped skunk is a medium-sized mammal that has a glossy black coat with a thin white stripe between its eyes and two stripes on its back.

Color: Black with two white stripes on its back and tail.

Sounds: Striped skunks make a hissing sounds when they're ready to spray.

Striped skunks winter in burrows. In spring, females give birth to four to six naked, blind, and helpless young. Though the skin sports only a light fuzz, the white stripes can already be seen on the black skin.

Skunks are omnivorous but seem to prefer insects and their larvae, mice, carrion, and eggs. They may invade farmyards and buildings, but usually do more good than harm by living largely on mice and rats. Still, they have been known to kill roosting chickens.

Skunks have few predators. Most animals learn to recognize the skunk's warning stripes and avoid its stinky spray. Some skunks are killed by owls and other birds of prey, which have a poor sense of smell.

Skunks live in farm land and semi-wooded areas in cities, suburbs and the countryside. They usually avoid heavily forested areas. The striped skunk lives throughout the state, but is most common along the western border and least common in the northeast.

No one knows how many skunks are in Minnesota. The skunk populations appears to rise and fall from year to year, depending on weather conditions, disease, and how much food is available. Skunks sometimes carry rabies, which is a good reason for people to avoid handling them.

Striped skunks can spray their scent up to 15 feet. Even three-week-old babies have the ability to spray.