The thirteen-lined ground squirrel, or "thirteen liner," is the small gopher-like animal often seen along roads in all but northeastern Minnesota. It is one of the animals that has adapted to urban and agricultural development, and actually has expanded its range in Minnesota.

General Description: Small rodents, buff colored with light and dark stripes down its back.

Length: About 11 inches, including the four-inch long black-striped tail.

Color: Golden to yellow body with distinct dark stripes. The stripes have yellowish squares or dots.

Mating occurs early in spring, when adults emerge from hibernation. Born a month later, the litter of about eight babies nurse from ten tiny nipples. Some females have a second litter later in summer after the first young have dispersed.

Mainly seeds, leaves, and grass, along with a good mix of insects, small birds, and lizards. 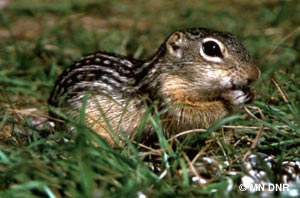 Originally occurring in the native prairies of the central U. S., thirteen liner's range has moved to the northeast, and they now live anywhere some grassland exists.

Thirteen liners are unprotected in Minnesota. They are not hunted or trapped, and have no fur value. Their main value is an important prey species in the grassland ecosystem. They sometimes damage agricultural crops.

These animals really do have 13 stripes - seven dark stripes separated by six lighter ones. The 13 liner is very familiar to Minnesotans because this little animal is the mascot for the University of Minnesota's "Golden Gophers!"