Opossums are related to kangaroos and other marsupials found in Australia. They originally were found only in southeastern U.S., but in recent years their range has expanded west and north all the way into northern Minnesota. They are excellent climbers, and they wrap their long prehensile tails around tree limbs for balance.

General description: An opossum looks like a cross between a muskrat and a rat. It is about the size of a house cat. It has a gray body, white face and pink nose. Its ears and tail are hairless.

Sounds: When threatened, opossums click their teeth, growl and screech.

Opossums mate between January and May, bearing two litters of 6 to 20 young each year. The young are not fully developed at birth. Their tiny front feet have minute claws which the babies use to climb up the mother's belly and into her pouch. Once inside, they attach themselves to a teat. There they remain for 60 to 70 days. For another month after that, the young opossums climb in and out of the pouch, never straying far. Finally, when mouse-size, they climb aboard the mother's back where they spend much of their time until becoming more independent.

Opossums eat almost anything, such as worms, snakes, insects, eggs, young birds, fruit, grain, garbage and the remains of dead animals (called carrion). After eating, opossums will wash much like a cat. 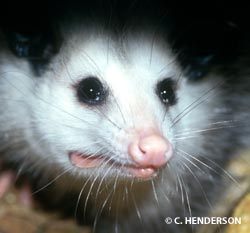 Opossums live in woodlands and agricultural areas in all of Minnesota except the far northern part. The opossum's naked ears, nose, and tail are very susceptible to freezing temperatures, which explains why the species is not found farther north. They spend most of their day in hollow logs or in dens in the ground, in brush piles, or under buildings. Some opossums will travel great distances, particularly at night.

When cornered, opossums may fall into a death-like state and secrete foul-smelling scent. This is called playing dead or playing 'possum'. Opossums are resistant to the venom of poisonous snakes such as rattlesnakes, which they sometime eat.