The white-tailed jackrabbit, or "jack," is the largest member of the rabbit and hare family, weighing from six to ten pounds. The long-legged jackrabbit is best recognized by its unusual style of running. When surprised, it will usually bound off with a gait resembling that of a kangaroo. But when frightened, it will drop low to the ground and accelerate to an amazingly fast speed. It is rarely seen because it is active mainly at night, and turns white in winter.

General description: Exceptionally long ears, the ability to leap 10 feet at a time at speeds of 40 miles per hour, and seasonal fur color change distinguish this rabbit from others.

Color: In summer, the jackrabbit is brown gray, with a white belly, feet, and tail. In winter, the fur changes to white, with somewhat darker ears. In more southern climates, jackrabbits do not change color. 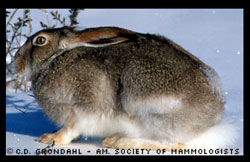 Adult females have their first litter (average of four young) in early April, and may have two or three more litters during the summer. Hares are precocial -- they are born with eyes open and a furry hide and they can hop about soon after birth.

Jackrabbits eat several plants and seeds such as winter wheat, dandelion, and blue gramma grass. Jacks seek out high-protein foods, and eat their own droppings as a source of protein.

Jackrabbits are typical of most prey species, in that their reproductive rates keep ahead of their main predators that include coyotes, fox, large hawks, and great-horned owls.

Brownish-gray in summer and white in winter, the jackrabbit lives in open areas and seldom is found near wooded windbreaks, except in the most severe winter weather. It is a prairie hare which is more abundant in wide open grasslands of the west. Although both were once numerous, grasslands and jackrabbits have given way to intensive farming in Minnesota's western counties.

White-tailed jackrabbits are classed as a "game species" in Minnesota, and during the autumn and early winter hunting season, several thousand are killed each year for their meat. But predators take several times more jacks than do hunters.

The white-tailed jackrabbit really isn't a rabbit at all, but a hare! Confused? Well, the main difference is that baby hares are born well furred with their eyes open, and can move around shortly after birth, whereas rabbit babies are born blind, hairless, and helpless. In Minnesota, our two hare species are the white-tailed jackrabbit and snowshoe hare, and our only rabbit species is the cottontail.