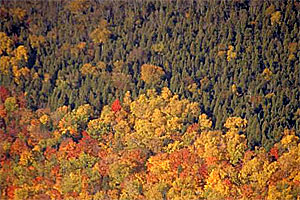 For example, of the 18 million acres of prairie that once covered one-third of the state, less than 1% remains. The great stands of pine forest that defined the northern coniferous forest have been largely replaced by younger forests of aspen and birch. More than 9 million acres of Minnesota's wetlands have been drained or filled, and many other wetlands are highly degraded.

High-quality examples can still be found throughout the state in every county, but in most areas they comprise just a small proportion of the total landscape. In the 6 counties making up the northern metropolitan Twin Cities area, for example, the Minnesota Biological Survey documented that less than 6% of the original area of native plant communities remains intact today. In the agricultural area of the state the percentage of land covered by high-quality native plant communities is also very small. In northern Minnesota, there are still some large areas of landscape with high-quality native plant communities, including the large peatlands of the north-central part of the state, which support bogs, fens, and other intact wetland communities. Although forested communities have changed in composition across much of northern Minnesota following 150 years of logging, opportunities exist for sustainable management and conservation of forested communities in large areas.

Each of the native plant community types and subtypes has been assigned a conservation status rank that reflects the relative rarity and endangerment of the community in Minnesota (S-rank) and globally (G-rank). Further information may be found in Conservation Status Ranks for Native Plant Community Types and Subtypes (839 kb), which also includes an explanation of the rankings.