Why are native plant communities important? 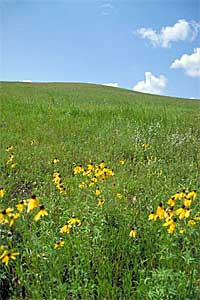 In Minnesota, native plant communities provide habitat for several thousand plant and animal species. Many of these species are uncommon in the state and many of them—such as the western prairie fringed orchid (Platanthera praeclara) and the Karner blue butterfly (Lycaeides melissa samuelis)—are almost completely dependent on native plant communities for their long-term survival and viability in Minnesota. Of such species, 440 are uncommon enough that they are listed under state or federal endangered species acts. In addition to relatively conspicuous plant and animal species, native plant communities also are likely to be reservoirs of other groups of species that have not been thoroughly surveyed or studied in Minnesota. These include microorganisms, such as fungi and bacteria which often play important roles in uptake of nutrients by plants, and insects and other invertebrates (which can help to cycle nutrients in ecosystems or to pollinate plants).