Poly Met Mining, Inc. (PolyMet) is developing a mine and associated processing facilities for the extraction of copper, nickel, and platinum group elements (PGE) in northeastern Minnesota. The mine will be the first of its kind in the state.

On September 24, 2021, the Minnesota Department of Natural Resources (DNR) initiated a contested case hearing process regarding the permit to mine for PolyMet’s NorthMet mining project, as directed by the Minnesota Supreme Court. The hearing will examine whether the use of bentonite clay to reduce oxygen and water infiltration into the proposed tailings basin is a practical and workable reclamation technique that will satisfy the DNR’s reactive waste rule Minn. R. 6132.2200, subp. 2(B)(2).

On February 12, 2020, the DNR submitted a petition to the Minnesota Supreme Court seeking review of the Minnesota Court of Appeals’ January 13, 2020 decision regarding three DNR-issued permits for PolyMet’s NorthMet project.

This addendum contains the NorthMet project Permit to Mine Findings of Fact, originally posted November 2018.

On August 7, 2019, the DNR issued the following order regarding requests for reconsideration of the Dam Safety Permit 2016-1380 and the nonferrous Permit to Mine.

The DNR has issued PolyMet’s Permit to Mine, Wetland Replacement Plan, Water Appropriation, Dam Safety, Endangered Species Taking Permit, and Public Waters Work permits. You can find these permits, along with supporting documentation, using the navigation menu above or below.

Prior to the current permitting phase, the proposed NorthMet Mining Project went through an extensive environmental review process. PolyMet submitted its initial project proposal to the DNR in February 2005. In accordance with state and federal laws, an Environmental Impact Statement (EIS) was prepared under the leadership of the DNR, U.S. Army Corps of Engineers (USACE), and the U.S. Forest Service (USFS). The Final EIS was deemed adequate by the DNR in March 2016 marking the end of the state’s environmental review process. On January 9, 2017, the USFS signed the Final Record of Decision authorizing a land exchange with PolyMet. This exchange will transfer the surface property owned by the Forest Service to PolyMet, who controls the sub-surface (mineral) rights. The land exchange is presently being challenged in federal lawsuits. On March 21, 2019, the USACE completed its Record of Decision and issued an individual permit to PolyMet for its NorthMet project.

The NorthMet Mining Project will be located in the St. Louis River watershed on the eastern edge of the Mesabi Iron Range, about 6 miles south of Babbitt. 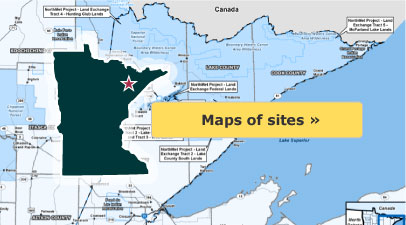 No releases found
go to all DNR news