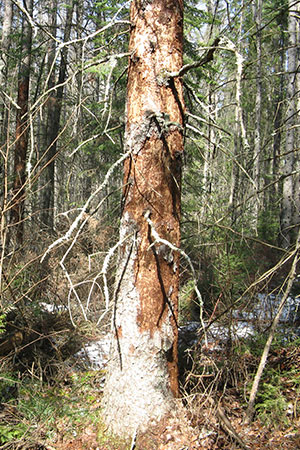 The current outbreak cannot currently be managed on a landscape level due to the abundance of beetles, ecologically sensitive nature of most tamarack stands, unpredictable site accessibility for logging equipment, and poor markets for tamarack lumber.

Our best advice for forestland owners who wish to manage their tamarack for timber is to regenerate mature or almost-mature tamarack stands before they are infested by eastern larch beetle. Encourage tree diversity, and don't shy away from promoting tamarack. Larch beetles will generally not attack young tamarack seedlings and saplings.

There is a good probability that any given tamarack stand in the state could be infested in the next several years. Once a stand is infested, substantial mortality can proceed over the course of several years, or more quickly. Reserve trees left as a seed source following harvest of infested stands will be attacked quickly and have less chance at successfully producing seed.

Thus far, there is no indication that larch beetles can be managed at the stand level. However, if a landowner does not want to harvest an entire infested stand, a best practice would be to cut all visibly-infested tamaracks plus several rows of healthy tamarack adjacent to infested tamarack. Trees should be cut when the ground is frozen, and removed and processed into lumber or chips before spring. If possible, tree diversity should be encouraged by leaving other tree species on the site, or by planting or aerial seeding with a mixture of site-appropriate trees, including tamarack.

In terms of small harvesting operations on private properties, logs should not be kept close to un-infested standing trees. Removing bark makes logs uninhabitable by ELB, so bark removal is an option if tamarack wood is to be left on site.

Other Sources of Information