Growing eastern white pine under a hardwood overstory with 40-50 percent crown closure can reduce weevil attacks while still providing sufficient light for healthy growth. Shade reduces high temperatures that are preferred by females. Growing trees in the shade also reduces the growth of the leader, causing it to be less vigorous with thinner bark, which is not as attractive to white pine weevil. 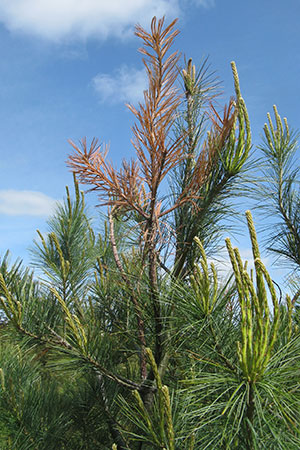 In small plantations or Christmas tree farms, monitoring for and destroying infested terminals might be worthwhile. Monitor for wilting terminals on warm, sunny days in the spring. Wilting terminal leaders can be pruned and destroyed before late July. Alternatively, removing all but one live lateral shoot directly below any affected terminal will promote single-stem dominance.

If any white pine weevil damage is unacceptable to you, insecticides can reduce local populations. If resin droplets from adult feeding on the previous year's growth are detected on two to five percent of trees in late March and April, apply to the terminal leader only, using an insecticide labeled for use on trees.

There are two ways to lessen weevil populations on young white pines in yards: