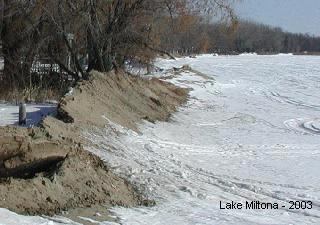 The elements with which man has to contend are four in number; namely earth, fire, air and water. Let's consider water which,  like the masquerader, is an element of many varied faces.

Water exists in the atmosphere as a vapor and is precipitated as rain and snow, dew and frost, water and ice. These forms are all chemically related, but physically they have widely different characteristics.

Most of us are familiar with the behavior of streams and lakes during the summer, but little thought is given to the winter phase of their annual cycle. With the coming of cold weather, the water in the lake or stream is gradually cooled. Temperatures within the mass of water tend toward uniformity due to continuous turbulent currents. Cold, dense surface layers sink, and the lighter bottom layers of warm water rise toward the surface.

Gradually the entire mass attains a temperature of 39.2 degrees F. (point of maximum density), and finally the surface film of water is further cooled, and when it approaches the freezing point, needlelike crystals of ice called FRAZIL ICE begin to form. On small lakes, or in the sheltered portions of large lakes, ice begins to form when air temperatures fall below freezing, but wind and wave action may prevent the complete freezing of large lakes even when the air temperature falls below 32 degrees F.

Depending upon the degree of turbulence, as well as the temperature, the crystals of frazil ice unite and form little floating masses of ice, which continue to grow by accretion of other similar ice masses. If this growth is accomplished without crushing, there results a clear thin sheet of RUBBER ICE.

The continuous ice cover now formed prevents loss of heat directly from the free water surface to the cold air so that the transfer of heat, the rate of freezing at the bottom ice surface is retarded although the ice sheet thickens steadily. Freezing often occurs very suddenly, six inches of ice cover forming in a few days. However, normal winter temperatures in Minnesota rarely produce sheets of ice more than 30 inches thick. Let's pursue this study: 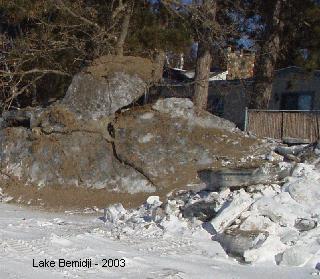 The writer had occasion to investigate conditions on Sand Lake, near Brittmount in St. Louis County, just north of the city of Virginia. This lake has a meandered area of 693 acres and an estimated drainage area of seven square miles. Ice action moved houses off their foundations, tipped retaining walls and left an open crevasse approximately two feet wide, two feet deep and twenty feet long in the ground. The top of the ground at this point was about five feet above the lake level. The buildings and walls affected were situated on the northwesterly shore of the lake on a sand ridge about 300 feet in width, separating the lake from a swamp area.

Some years ago a similar situation, but much more extensive, occurred along the southwest shore of Cotton Lake near Detroit Lakes in Becker County. This lake has a meandered area of 1649 acres, and an estimated watershed area of five square miles. In this instance also, rainfall and snowfall were deficient during the fall and winter period. Wide variations in temperature occurred during December and January when daily fluctuations of 25º to 30º between the high and low were frequent. The lakes in the vicinity of Cotton Lake froze over the latter part of November, opened up and froze again. Since fall precipitation was below normal and there was little or no snow on the ground, it might be termed a dry freeze-up.

There were nineteen cottages in the area examined, thirteen of which were damaged. Two had been moved back from the shore before the principal expansion force was exerted and thus were saved. Computations indicate that the total expansion of the ice, at the southwesterly end of Cotton Lake where the damage occurred, may have been as much as eighteen feet. Some buckling of the ice was found along the north shore where ridges rose to a height of 3.5 feet above the general ice level of the lake, indicating an expansion of 2.4 feet in that particular location. The foundations of some of the houses were so badly crushed that it was evident the entire ground on which they stood had been removed.

Ice, during the spring thaw, may become detached from the shores and be blown against other parts of the shore, exerting great pressures, and since these masses of broken-up ice drift with the wind, they may produce jams on and against the shore, resulting in the formation, at times, of ice ramparts.

Since these jams are wind produced, and the spring winds vary in direction, any of the less protected shores may be affected. Various other shore distortions may result, such as the change or the actual destruction of sand bars, recession of banks, formation of irregularities in shores having materials of unequal resistance on the larger lakes.

In conclusion, it appears that the effects of the "jacking" action of ice are most severe during those periods when there is little or no snow-cover, and temperatures fluctuate greatly. It is also evident that the expansive forces, which result from these wide variations in temperatures, are so powerful that it is impractical, from an economic standpoint, for the average individual to construct retaining walls or foundation of sufficient strength to resist them. The safest course is for riparian owners to be sure, where conditions are favorable for such ice action along a lake shore, that the buildings are located as high above the lake level, and as far removed from the shore as practical.

The construction of improvements on narrow ridges lying between a swamp area and the lake proper should be undertaken with extreme caution. If a retaining wall is constructed, it should have a sloping face on the lakeward side, flat enough to permit the advancing ice to over-ride it.

Trees growing near the shore are likely to be over-turned and seldom warrant costly protective works. Rip-rap is of little value unless laid on a properly placed gravel foundation and on an extremely flat slope. The conditions herein mentioned are but a few examples of the dangers which have occurred.

To all prospective purchasers of lakeshore property, let it be said that the best insurance against damage by action of the ice is to have been warned of the likelihood of its occurrence. Be sure to note the physical conditions on the property and along the lakeshore adjacent to it because the evidence of serious ice action, if it has ever been present, is there if one looks for it. Damage from this source, while regrettable, is always the responsibility of property owners.