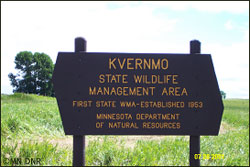 How did WMAs get started?
Minnesota's WMA system started in 1951, when the State established its "Save the Wetlands" program to buy wetlands and other habitats from willing sellers to address the alarming loss of wildlife habitat in the state. Initiated by a handful of visionary wildlife managers, the WMA program evolved into the present-day system of WMAs.

How many WMAs are there and where are they located?
As a result of more than 50 years of support by hunters, trappers, wildlife enthusiasts, and legislators, today there are over 1.3 million acres of high quality habitat in about 1,500 WMAs located throughout the state, making it one of the best and largest WMA systems in the country.

Who uses WMAs?
Ranging from prairies and wetlands to forests and brushlands, WMAs provide opportunities for hunting, fishing, trapping, and wildlife watching activities. Hundreds of thousands of hunters use these public wildlife lands. Pheasants, waterfowl, deer, and ruffed grouse are the major game species hunted, but WMAs also provide wild turkey, sharp-tailed grouse, rabbit, and squirrel hunting. Wildlife resources are very important to Minnesota; 15 percent of Minnesotans hunt and 52 percent of Minnesota residents watch wildlife, the highest participation rate in the country. Hunting and wildlife watching are a $1 billion dollar industry in Minnesota.

How are WMAs managed?
WMAs are the backbone of DNR's wildlife management efforts in Minnesota. Much of the wildlife managers' work is directed toward protecting and enhancing wildlife habitat on WMA lands. For instance, prairie and grasslands are planted to provide prime nesting cover critical to waterfowl and pheasant production. Wetlands are restored and enhanced to benefit waterfowl and other wetland wildlife species. Pheasants also find excellent winter cover in cattails and other marsh vegetation. Prescribed burning is done to maintain grasslands, prairies, and brush lands is important to sharp-tailed grouse and prairie chickens. Forest openings and regeneration projects benefit ruffed grouse, wild turkeys, deer, and moose. Wildlife food plots are managed to feed both resident and migratory wildlife. Woody shelter belts are planted to provide winter cover and nesting sites for upland birds and a variety of nongame species as well.

Who pays to acquire WMAs?
Minnesota's Legislature and sportsmen have funded WMA land acquisition in a multitude of different ways. The mainstay of funding has been the surcharge on the small game hunting license. Hunting license fees, bonding funds, Reinvest in Minnesota funds, including Critical Habitat License Plate dollars, and Environmental and Natural Resources Trust Fund (ETF) funds have also been used to buy WMAs. Conservation groups also donate land and money to support the acquisition of WMA lands. Another major source of WMA acquisition funding available to DNR and private conservation partners is the Outdoor Heritage Fund. The Outdoor Heritage Fund is one of several created by the Clean Water, Land and Legacy Amendment to the constitution in 2008. 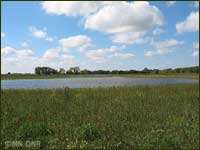 What is the future outlook for WMAs?
Despite the program's success, the state is still losing valuable wildlife habitat at an alarming rate. Continued management efforts on existing WMA lands and acquisition of new parcels will be critical to maintaining quality wildlife habitat in Minnesota. According to a 2002 Citizen's Advisory Committee Report on the direction the WMA system should take, acquisition efforts should be accelerated with a long-term 50-year goal of acquiring 702,200 acres of new WMA lands.

Roger Holmes served the citizens of Minnesota for 41 years in his career with the Department of  Natural Resources including 18 years as the Chief of the Section of Wildlife and 10 years as Director of the Division of Fish and Wildlife. He was instrumental in leading Minnesota to become one of the top states in fish and wildlife conservation by tirelessly and relentlessly promoting wetland conservation programs, state and federal fish and wildlife land

The State of Minnesota honored Roger Holmes on May 3, 2008 by dedicating the 1036-acre Roger M. Holmes State Wildlife Management Area in Douglas County as a tribute to his long and distinguished career and his many contributions to Minnesota’s fish and wildlife resources. 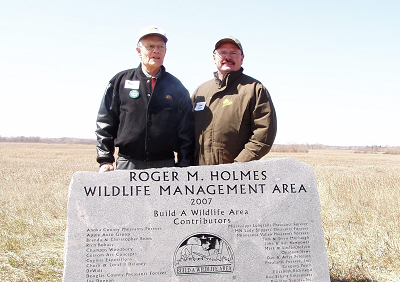 Image: Holmes on the left with Joe Duggan of Pheasants Forever at the dedication of the Roger M. Holmes Wildlife Management Area in May of 2008.