Every summer, Rana Holmer keeps a close watch on the old chokecherry bushes growing at the edge of their fields. "If you don't check them often enough, the bears are better at checking them than you are," Rana says with a laugh. "When the berries start to get dark, you know, that dark brandywine color, you better keep checking them every day because if you don't they'll be gone."

"My number one goal for the woods is to provide a place for wildlife to grow..."

Much of Rana and Todd Holmer's land near Frazee is enrolled in the Conservation Reserve Program (CRP), which gives incentives for removing sensitive land from agricultural production. With the CRP help, the Holmers have planted upwards of 200,000 trees, converting what was once thistle-infested abandoned pastures into young woodland. "My number one goal for the woods is to provide a place for wildlife to grow and replenish, which we've really seen since we've been here," 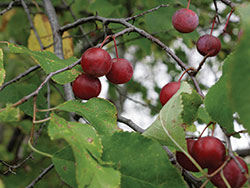 Todd says. The list of critters they've spotted is long: deer, pheasants, grouse, ducks, trumpeter swans, bear, bobcats, coyotes, wolves, and even possibly a mountain lion. To improve wildlife habitat, the Holmers included native chokecherry, wild plum, and highbush cranberry among their CRP plantings. But animals aren't the only ones who benefit from these wild edibles. During chokecherry season, Rana collects buckets full of the astringent fruits and turns them into delicious jellies and syrups. "First you pick and clean them and take out leaves and other stuff. Then you cook it. Boil them just so where they pop." Rana drains the juice, cooks it with sugar (and pectin for the jelly), and cans it in glass Mason jars for her family to enjoy throughout the winter. She also makes wild plum jelly. "The fruit is growing there, so it's nice to use it," she says of the summer bounty. "It's like what our grandmothers used to do." Sometimes they'll give the tasty spreads and syrups away as gifts. "That's if you do a lot though," Rana says, "otherwise you don't want to give it away!" 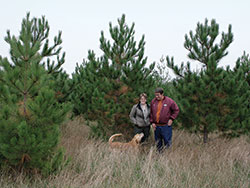 Rana is also an avid hunter of morels—a delectable wild mushroom. "When they start popping out of the ground in the spring I go out to find them almost every day after work. I love the hunt!" For a few short weeks in May, Rana and Rocky, the Holmer's energetic Labrador retriever, explore the wet soils near their creek, poking around dead logs in search of the seasonal delicacy. Rana freezes the mushrooms, dehydrates them, or cooks them fresh. "This year we stuffed them with cheese and breaded and deep fried them. Oh my gosh they were good." Though not a morel fan initially, Todd recently came around to the spring treat. "The last couple years she's got me eating them," he admits. Rana says with mock regret, "I should not have done that, because now I have to share!"