Patrick Lanin's secret to eternal youth is simple—staying active in the woods. "I'm 77 going on 14," he says mischievously. Patrick hops nimbly over a tree root and trots quickly down a slope toward his creek at the base of the Mille Lacs Uplands moraine,
which rises impressively above the edge of his property as a long tree-covered ridge formed by the glacier that carved out Mille Lacs Lake. He and his wife Emily bought the first piece of their now 140-acre property near Brainerd in 1973. "We saw the wooded ravine and everything and I knew we had to have it. I've stood on top of the bluff and saw ducks fly below me. When that happens, it's something you don't forgot."

"As a kid, I'd go to the co-op grandparents Finnish."

Patrick is proud of his Finnish heritage. His grandparents emigrated from Finland in the early 1900s. "I've got the woods thing in my DNA," he says, referring to Finland's dense forests. Patrick credits the Finns as the first people to organize the cooperative movement in Minnesota, noting that he grew up with co-ops as a part of his life: "As a kid, I'd go to the co-op store in Virginia, Minnesota with my grandparents and hear Finnish spoken by nearly everyone there." Perhaps this is part of the reason that he was first drawn to the Northwoods Forestry Cooperative (NFC), which he joined in 2005. "It just sounded like a great idea. You know, a group of people interested in what I was interested in. That was just natural." 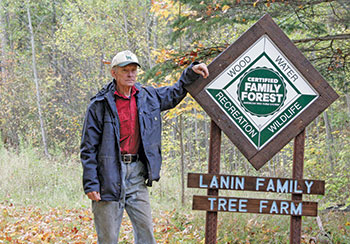 The NFC was founded in 2001 with a mission to "promote sound woodland management and to assist members in wood products marketing," according to the NFC's website. Patrick, who has been the NFC's president since 2011, sees an even simpler purpose. "Members helping members," he says. "Getting together with people who have the same interests." NFC members are spread throughout central Minnesota from Aitkin through Stanchfield and have a variety of opportunities to mingle. Once a year a field day is held on a member's property. In 2014 the Lanins hosted the field day and Patrick demonstrated the capabilities of his Farmi winch and Logrite log arch by extracting a freshly cut ash log from his creek. The NFC also organizes a work day about once a year. Members gather at someone's property to help out with a woodland management project, followed by lunch. The NFC also hosts an annual meeting with a speaker, monthly member meetings, and a quarterly newsletter that Patrick edits. The newsletter contains member stories, interesting woodland news, and advertisements from members looking to buy or sell woodland products and borrow equipment. NFC members can also buy shares of certain pieces of equipment such as a portable Peterson sawmill, which currently has seven member-owners. 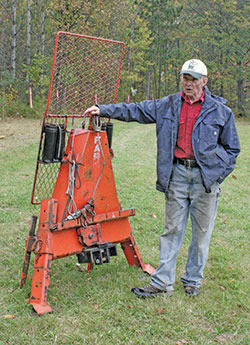 Emily Lanin notes the educational benefits of being involved with the NFC. "By attending the field days, the annual meeting, and just talking to other members, we all learn about the best, most efficient ways to manage our own woodlots," she says. But for Patrick, the key element remains simply the esprit de corps the camaraderie he finds being among other landowners. "It's just a group of people who own woodland who help each other out."