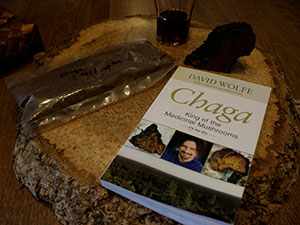 "We call it 'choffee'," Alan says with a grin, cradling the warm mug of coffee brewed with chaga mushroom, a fungus that grows on mature birch trees. "It might be the next big thing at Starbucks," Jennifer adds wryly. At -24 degrees Fahrenheit in Gheen, Minnesota, it's a good morning for choffee.

Chaga is a slow-growing, parasitic fungus with a woody, charcoal-like appearance. Over a period of several years, the fungus absorbs nutrients from its host, eventually killing the birch tree. "It just sucks all the life out of a good tree," Alan says. Bad news for the birch, but good news for chaga harvesters. According to Jennifer and Alan, in some cultures chaga is believed to be a good source of antioxidants and other beneficial plant nutrients, which has lent the mushroom its popularity as a traditional remedy for various ailments. "We drink it just because it's supposed to be good for you and it's right here in our woods."

Jennifer and Alan seek out the mushrooms on older birch trees in moist areas of their woods, where the birch is mixed with balsam fir and white cedar. "You probably find it the best where it transitions from swamp into upland, right at that edge for about 100 yards seems to be the best picking for it," Alan notes. They use a hammer and chisel to cleanly cleave the dark, dense growth away from the birch tree. "You'll have to take a ladder in the woods with you," Jennifer cautions, noting the mushrooms often grow out of reach, high upon the trunk. Once harvested, the mushroom can be air‑dried and broken into smaller pieces for use. Some people grind the mushroom into a course powder, but Jennifer and Alan just steep a chunk in their coffee pot every morning. They have also prepared the chaga plain, as a tea. "Take a ping-pong ball-sized piece, put it in a pan of water on the stove, bring it to boil, shut it off, and put the lid on. Wait 15 minutes," Jennifer says. "It's really good with maple sap in it." She ad s that she once tried to use homemade birch syrup—a thin syrup with a heavy molasses flavor—to sweeten her chaga tea. "It just tasted more like birch," she laughs.

Jennifer and Alan mostly use their harvested chaga themselves, or share it with neighbors they feel might need it. However, they have sold a little at their local farmer's market, where the woody grounds can fetch around $40 per pound. "Some people look at you like you're a witch doctor," Alan chuckles, "and that's okay." The Food and Drug Administration recognizes chaga as a food, so Jennifer and Alan figure their 'choffee' habit can't hurt. "It's here and it's free, and so why not?" says Jennifer. "I mean, some people buy supplements. We just get ours from the woods."