"We were looking for a property, and to be honest with you... just the setting of this place. I mean, look at it!" Jack Gustafson said, gesturing to the pond below that hummed with the spring sounds of frogs, birds, and insects. "Just coming here and listening to the frogs 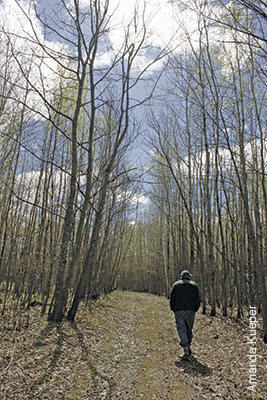 croak," is reason enough to own the 120-acre woodland near Laporte, Minnesota, but he and his family enjoy a variety of activities in their woods including deer hunting, blackberry picking, and splitting firewood. "I never have an excuse I have nothin' to do. I always go out and cut firewood, or scout for deer signs, or just walk around and look at change, look at the results of my cutting."

Jack has had six timber harvests performed over his 30-year ownership of the property, and has worked with four different loggers. His main goal is to manage the forest for better wildlife habitat. His most recent project included working with a small-scale logger to do three minor clear-cuts along the forest that bordered his clover fields to create a "softer edge" and browse for the deer once the aspen resprout from their roots, which was already visibly beginning to happen. His main reason for contracting the work was that he lacked the equipment to perform the harvests himself. Jack felt he had positive relationships with the loggers he worked with, though he admitted to knowing the reputations of local loggers from his pre-retirement days of working for the USDA Forest Service. For landowners who do not know any loggers personally, he suggested looking at the Minnesota Forestry Association's list of consulting foresters, or contacting a DNR forester. He also advised: "Talk around and ask for a reference. Find out, 'Okay, who have you cut [timber for] in the past?' And then talk to that person that has had the relationship with them." 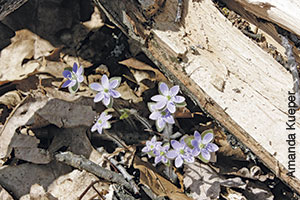 In addition to contracting work, Jack has done a variety of woodland management on his own including post-harvest clean-up of remaining debris and lower quality trees. He also harvests firewood frequently, which provides 95 percent of the heat for his home in the wintertime. "And that's very satisfying; not only from the heat you get out of it, but I'm able to utilize trees that die on my place or residual that's leftover from timber sales or windthrow," he notes. "Another thing too, it's darn good exercise!" He notes that doing the work himself saves money, but he also notes the potential dangers, citing a close-call he had once while felling trees that "makes you really believe in chainsaw chaps!" At the end of the day, it's the simple pleasures that bring Jack out into his woods: "Nothing more satisfying than going out on a nice sunny winter day and working in just a sweater. Maybe that's old fashion thinking, but the satisfaction of a job well done."