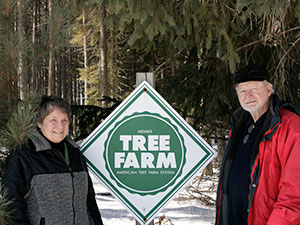 "I've always liked trees." Mel Rosholt has been working with timber since he was 10 years old, helping his father cut slabs for the family sawmill. And, he doesn't plan on stopping anytime soon. "I hope to be out there when I'm 90. I'm not quittin'!" he laughs.

Mel and his wife Sheila own 103 acres of woods near Warba that they inherited from Mel's father. The property once had agricultural fields, but Mel helped his father convert them to red pine plantations when his father retired from farming in 1963. They bought the trees from the Minnesota State Forest Nursery for a penny a piece. His father joined the American Tree Farm System shortly afterwards, a tradition that Mel has carried on. In fact, in 2010 Mel was honored as the Northeast Region Minnesota Outstanding Tree Farmer of the Year. "I like tree farming. I like to be out in the woods," Mel says. "That's where I grew up. It's my land." 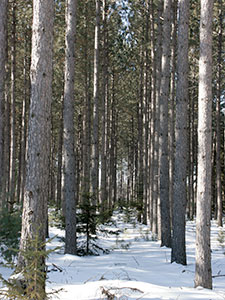 Mel and Sheila had two harvests to thin the red pines and improve their future growth. Mel's neighbor gave him a good recommendation for a logging company. "I can't say enough about those guys, they did a terrific job," he says. He describes the careful precision of the harvesting equipment. "The harvester can reach out 17 feet to the side. They program it, depending on the size of the tree, to cut it off at 100 inches, or 16 feet. The harvester has big tires so they don't dig up the ground." The payment for the harvest was worked out in a contract beforehand. Mel explains: "They propose how much they're going to pay you for each cord"—a unit of measurement for timber—"or if it's logs, so much per thousand feet."

Mel has also performed his own small harvest. One summer, his brother was having a harvest done nearby. Mel saw an opportunity to do some needed thinning to a small area of red pine and have the timber hauled to the mill along with his brother's. So he spent most of his weekends that summer in the woods with his chain saw felling 20-foot pine trees. It was hard, sweaty work, but Mel had a good time. "There's just satisfaction in doing it, I guess. Sheila and my boys, they'd come and help me load the trailer and stack it up." "It's fun when it's not your daily job that you have to go to every morning. It's exercise," Sheila adds. Being a small harvest, their profit from the endeavor was modest; but their mission of thinning the pines was accomplished. "It's not a big money-maker," Sheila admits, "it's about the love of the land and conserving it for future generations."

Though they had a management plan through the American Tree Farm System for quite some time, the Rosholt's only recently had a Woodland Stewardship Plan written, allowing them to apply for the Sustainable Forest Incentive Act. "We could have been doing that for years! We've been paying all the taxes ourselves for years and years," they laugh ruefully. Mel pages through the thick binder of information. "It estimates how many cords there are. It talks about stand objectives: preserve the property, providing revenue for the property, thinning, keeping trail systems maintained, monitor for insect and disease. Then it projects years for completion." Despite being a longtime woodland manager, Mel has gotten a few new ideas from the plan. "What sticks out is the information they gave me about white pine blister rust control. I think that was one of the biggest things." Sheila encourages other landowners without a management plan not to wait: "Go ahead and look into it. It's definitely worth it."