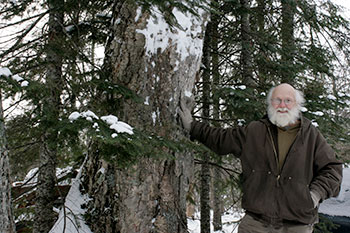 Dennis Chilcote's inspiration for creating art from the forest came at an early age. "I had a grandfather who spent most of his time in the woods. He'd take me out when I was really young, just put me up on his shoulders and off in the woods he'd go. He instilled that love of wilderness in me, and really a fascination with nature-craft."

A variety of intriguing creations lay across the table: a tiny pair of shoes woven from birch bark; a delicately carved wooden miniature of a moose antler; and a diversity of baskets made from birch bark, black ash wood, and richly-colored willow stems.

He pulls a small object from one of the baskets. "This is a willow whistle, it's something my grandfather taught me how to make when I was a little kid. You cut a piece of willow early in the spring when the bark is slipping and you can slip the bark right off the stem. Then you hollow out the inside to make the sound box and slip the bark back on. And then," he produces a few cheerful tweets, "it works. So it's a little wilderness whistle." 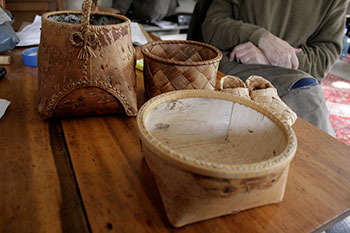 He gestures to two of the birch bark baskets. "This is where the birch bark has been cut into strips and then woven. This is very Scandinavian," he says of the first. "And this is very typical of early North American birch bark work, where one piece of birch bark was cut into a pattern, and then folded and stitched into place," he says while examining the second basket, which is stitched together with spruce root and has a handle woven from sweetgrass. "So you've got grass, and root, and bark. Several different products from the forest."

Dennis harvests much of the material for his nature-crafts from his own woods, and supplements from nearby federal forest land using special harvesting permits. Dennis and his wife Sedna are long-time owners of an inherited property north of Cook, and they recently purchased a 20-acre parcel of diverse woodland near Schroeder where Dennis is building their retirement home. The couple wished to be closer to the North House Folk School in Grand Marais where Dennis has taught courses in birch bark and black ash basket-making for the last decade. Dennis believes in teaching his students the entire process of basket creation—from harvest to final product. "We start right from the tree," he says.

To harvest birch bark for his baskets, Dennis enters the woods in mid-June to early July. "Birch is a really unique tree. There's a time of the year where you can remove the outer bark from the birch tree and leave the inner bark attached to the tree itself." The inner bark protects the tree, which will eventually produce a new outer bark. In this way, birch bark can be harvested without harming the tree. Dennis makes two horizontal cuts around the tree and a single vertical cut, producing a tube; he then opens up the bark and rolls it up skyward along the tree (with the inside of the bark facing outward) to prevent it from tightly curling as it dries. To use the bark, he softens it with warm water or steam, then cuts and shapes it as needed. "You might have to buy a leather awl, a rotary punch, and good pair of scissors. But with that kind of investment, you're off and running."

Gathering the raw material for black ash baskets requires a different process. After the ash log is harvested, Dennis strips the bark and then forcefully pounds the wood with a metal mallet along the length of the log. "You need to actually hit it with some force, smack it pretty good," he says. Ash grow more rapidly in the spring, and a cross-section of a log shows annual rings consisting of bands of wide, extremely porous spring wood and narrow, less-porous summer wood. The force of the pounding cracks the weaker spring wood along the ring separations, allowing Dennis to easily peel from the log strips of splint that can be dried and woven into baskets. He can usually peel 20 to 40 layers from a single, good quality log.

So, why nature-craft? Dennis gestures again to the stitched birch bark basket, a style traditionally made by indigenous North Americans from Maine to Alaska. "This is a very functional basket, I mean it's sort of `woodland Tupperware' really, and it was used for everything. But to make a functional basket, you didn't need to make a beautiful basket. And yet, they all did. When those folks had time, they would turn something of utility into something of beauty. And I think that's just the nature of the human being," he muses.