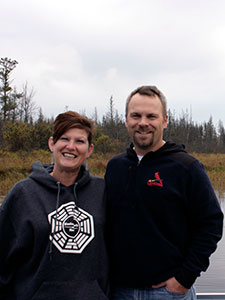 "I was a loon in a former life," says Amy with a smile. "I like to be on the water." Amy Wyant and Jake Jaskowiak own 149 acres of woods along the shores of Lake Waukenabo and West Lake in Aitkin County that they call "the Ranch." As Amy puts it, it's their family's "Heaven on Earth." The area holds a wealth of "family energy" for Amy. Along these shores, her parents shared their first kiss, Amy learned to hunt from her father, and today she, Jake, and their four children escape from the hubbub of life. "This is our place to come and relax. Our kids love coming up here. It's a very special place."

Another special thing about the family's lakeshore is the abundance of wild rice growing along it. Wild rice, Minnesota's official "State Grain," is a native grass that grows on lakes and rivers throughout much of the state. It has long been an important food source for wildlife and Minnesotan. Wild rice has a long history in Amy's family as well. "I grew up with rice," she says. Amy's parents spent many years cultivating wild rice in paddies on land they owned not far from the Ranch. Before that, Amy's grandparents harvested wild rice from Lake Waukenabo, gathering the grain in canoes and drying it on large tarps spread along the shore. Amy's mother, Trix, recalls seeing small clouds of dusty chaff produced when her parents processed the rice by winnowing out the dried husks. 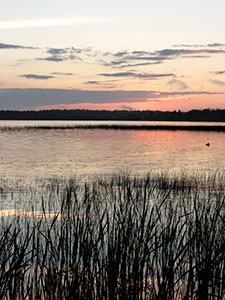 Amy's parents accumulated hundreds of acres of land over the years, including the Ranch, which they purchased in 1980 and eventually passed on to Amy and Jake. "My husband was very much a lover of the land," Trix says, a sentiment that clearly lives on in Amy. The land ethic passed down from Amy's father played a big role in Amy and Jake's decision to get a conservation easement on the property. "The wild rice, the conservation, protecting the habitat, protecting the land so that it never could be developed—the philosophy of it just aligned with our values," Amy says. In 2013, Amy and Jake were approached by the Aitkin County Soil and Water Conservation District to place a Reinvest In Minnesota easement on their land as part of the Wild Rice Shoreland Protection Program. The program, administered by Minnesota's Board of Soil and Water Resources, aims to protect healthy waters where wild rice grows. Wild rice is sensitive to disturbances brought by shoreline development such as pollution, erosion, and boat traffic, which has led to its decline in many places throughout the state and country. Conservation easements provide permanent protection for wild rice habitat. "It can never be subdivided or developed," Amy explains. "It all has to be natural forever."

The conservation easement protects Amy and Jake's land while still letting them use it for activities such as timber harvest and recreation. "Those were important conversations for us—that we could still hunt, we could still put in our ski trails. So we talked about all of the things we still can do on the land that's in the easement," says Amy. Amy and Jake see many benefits to the easement including the fact that it keeps their lakeside retreat peaceful for themselves and the other local inhabitants. "It's a sanctuary for wildlife, and there's a lot of wildlife along the shore of that lake," says Jake. Amy and Jake aren't personally interested in harvesting the wild rice, they are happy just knowing it is there for the wildlife. However, one of their sons has gone ricing before, and they wonder if he might harvest the rice on their lake someday. With the conservation easement in place, at least they know he'll have the opportunity if he wishes. As Jake puts it, "This easement keeps things wild."