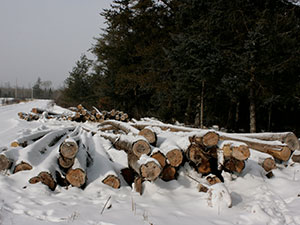 If you're in the business of cutting down trees, it is important to have access to resources for learning how to do it safely and sustainably. That, at least, is one of the guiding principles behind the Minnesota Logger Education Program (MLEP), a nonprofit that was created in 1995 to "assist logging business owners in meeting ever-changing demands of their profession," according to their website.

MLEP offers educational classes on a variety of topics related to timber harvest, and loggers who wish to become members of MLEP must meet certain educational requirements each year. Jennifer and Alan first began attending MLEP classes in 2006 when they were harvesting larger volumes of timber for their business. However, it was easy to see how the classes could benefit landowners as well. "What would be handy for the average landowner is to go to some of the classes on the different methods of thinning and timber management," says Alan, noting that they usually saw a few other landowners at each class who were just trying to get up-to-speed on how to do small harvests on their own land. Other class topics they have taken include how to control erosion during stream crossings and how to harvest for improved wildlife habitat. MLEP members pay an annual fee to attend classes, but classes are also offered a la carte. "You can pick and choose the various classes to go to," says Alan. Classes are held all over the state. "We picked one one time down at the Whitewater State Park in southern Minnesota, because we wanted to go camping down there."

Jennifer and Alan see another potential benefit for landowners who attend MLEP classes: "It would really be handy for the landowners to go to some of the MLEP stuff and interact with the loggers, and see things from their perspective too," explains Alan. "And it would actually be a good way, I think, for small landowners to find a good fit in a logger in their area." MLEP also provides an online tool called the Minnesota Forest Resource Management Directory, which provides a state‑wide list of their members. Small landowners could benefit from this resource as well, says Alan: "Generally speaking, there are really small loggers in everybody's district that they could connect with to help them with thinning. And that's where this directory comes in handy, because you could really find the ones that are sized for your operation. I mean, there are some guys as small as pulling logs out with horses. They're not all on a monstrous scale."

Jennifer and Alan continue to benefit from the network of folks they met through MLEP. "I think the people you meet is probably the most valuable thing," says Alan, noting that natural resource agency employees and private foresters often attended classes in addition to the loggers and landowners; "you get to build relationships with other people you would never interact with otherwise."