The Chamberlain homestead might best be described in two words: life everywhere. Dozens of acres of sprawling wetland are a haven for wildlife such as ospreys and green herons. A 16-acre woodlot is home to old-growth sugar maple, basswood, and a den where Jim Chamberlin has spied fox kits venturing out of the darkness. 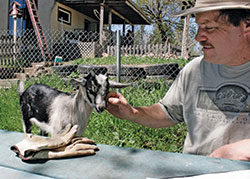 In the field behind the house a crop of asparagus noses its way through the soil as fruit trees and hybrid hazelnut bushes awaken after a long winter. Kids—both human and goat varieties—playin the backyard. One of the goats hops on the table to investigate a conversation. "There's a small natural lake on the back of the property. We have about a half mile of shoreline on the lake," Jim says while affectionately petting the inquisitive creature. "We've got a little sitting spot down on the lake that's pretty special." 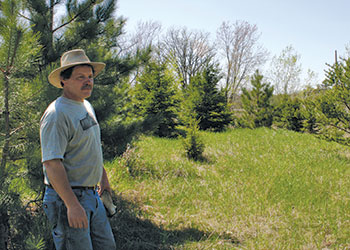 Jim and his wife Audra ran a bakery before moving to their property in 1995 with their children, some of whom are grown now with young children of their own. "I'd been in food service for 20 years, and I was tired of standing on concrete all the time and wanted a change of career. Always been interested in farming, gardening in particular, ever since I was a kid in 4-H." Jim got off the concrete, but not out of food service entirely. For a while, the couple ran a community supported agriculture (CSA) program selling produce and other products from their farm and woods. "I know where the trees are that produce the best mushrooms: chicken of the woods and maitakes (hen-of-the-woods)." In addition, Jim cultivates shiitake mushrooms on oak and ironwood logs in his woods. He became interested in growing shiitakes after attending a Minnesota Forestry Association workshop and bringing home a few logs that were inoculated with shiitake spores. Today he keeps about 500 logs at a time, replacing them as their productivity wanes. During his best year, he was harvesting 20 pounds of mushrooms per week. 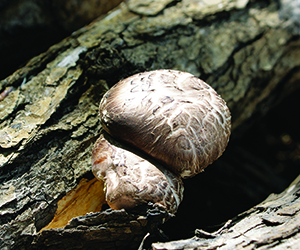 Jim says that shiitake cultivation requires a sheltered space and lots of water?the logs need to be either soaked or irrigated somewhat regularly to produce mushrooms. This can be hard work, but Jim says that it's easy to try on a small scale. "When we started off, we just grew them right behind the shed here. We had like a hundred logs ? and we had all the mushrooms we could use and put up for the winter. You can freeze and dry them. We've pickled them." Jim says that the cost of log-inoculation supplies (spore-infused dowel rods and a bit of wax to seal the rods into the log) cost about $1 to $1.50, and one log can produce four or five pounds of mushrooms before it loses its productivity. Jim sold his mushrooms to local restaurants and through the CSA for a while. These days he is less interested in profiting from his operation. Rather, the main benefit of growing mushrooms is eating them. "In the springtime when you got shiitake mushrooms, fresh asparagus, and a little goat cheese, put it all in an omelet and cook it up—it's pretty good."