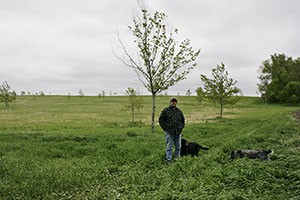 The population of Nerstrand, Minnesota clocks in at just under 300 people. However, for a small town, it has some pretty big 'claims to fame.' It contains Nerstrand‑Big Woods State Park, a couple historic churches maintained by the Valley Grove Preservation Society, and one of the largest oak savanna restorations in Minnesota. "This savanna would have been typical of what you would have seen in this area," says Peter McKinnon. "When they talk about 'sod‑busters,' you’re busting this sod here. The root system just goes straight down."

Sixteen years ago, the oak savanna surrounding Peter and Peggy McKinnon’s home and the neighboring Valley Grove churches did not exist. It was a corn and soybean farm—and it was for sale. The owners had interest from a real estate company, but neither the McKinnons nor Valley Grove wanted to see the land developed. So together, they raised the funds to buy the property themselves. Current and former community members donated to Valley Grove to help them purchase about 55 acres, and the McKinnons bought the rest. The team was also able to enroll the land in the DNR’s Forest Legacy program, which paid for a portion of the cost in exchange for placing the land in a permanent conservation easement. Through these efforts, the 113‑acre farmland was set on a course for restoration, rather than development. "It was the right thing to do," says Peter. 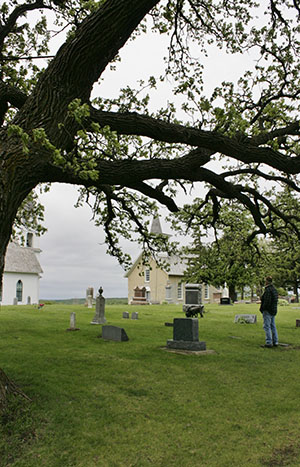 The McKinnons chose to restore the property to oak savanna to reflect the natural history of the land. Through a company called Prairie Restoration, they seeded native grasses and forbs first, adding as much variety as they could. "You really want a diversity out there. And you want to do stuff that’s local." The following year they added the trees—bur, red, and white oak mostly, with a few other species mixed in. Since then, the McKinnons have diligently managed the young savanna. One of Peter’s favorite tasks is performing small‑scale controlled burns. "I’m a pyromaniac," he jokes. Fire is a necessary part of prairie and savanna ecosystems. It revitalizes the native plant life and kills undesirable woody plants that can creep in over time. "There’s this black landscape. Nothing is left," describes Peter. "Get a first rain, pretty soon—boom. The grass starts coming." Peter emphasizes the importance of ongoing management in his savanna. "You can’t just let it go. You’re committed to it."

As Peter moves through the 16‑year‑old savanna, he recalls how empty the land surrounding his home used to seem. "I would always walk up on this corn field or bean field, and it would just be sterile. Before we planted the prairie, I was standing up on top there, and there was not a weed growing, there’s no insects,” he remembers. But after restoring the savanna, life began trickling back to the landscape. "One day you look out and say "What is that bird?" And it’s a meadowlark. I’d never seen a meadowlark." The meadowlarks have been joined by bobolinks, woodcock, owls and other birds of prey, and even the endangered Henslow sparrow. What’s more, native flowers Peter never planted, like Joe‑pye weed and meadow rue, have begun to pop up amid the grasses and young oaks, finding their way slowly back to this land after a long absence. "You’re taking a piece of sterile ground and you’re converting back to the way it was. You’re giving that back. It’s just unbelievable. It’s back to what it should be."