Community has always been important to John Wallin, a Nisswa native. Locals refer to John's neck-of-the-woods as "Wallinville," an area populated by the descendants of John's grandparents who raised 10 children, many of whom purchased land and settled down in the area. "We grew up with aunts, uncles, cousins, other family, and other neighbors. And what was nice is that we helped each other—cutting and 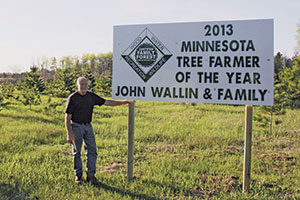 putting up hay and wood, and putting up ice. We worked as a team." John has applied this teamwork philosophy to all aspects of his life. He believes strongly in community involvement and has delved into a wide array of community services over the years, from volunteer firefighter chief to Cub Scout leader to involvement in a variety of county boards and organizations, including serving as chair for the Crow Wing County Planning Commission for over seven years. As a now-retired educator, he spent 17 years of his career as a special needs instructor at the very high school from which he graduated.

John's community involvement also extends to his landowning philosophies. Heeding his father's advice that land is "the best investment you can make," he and his wife Carolee have acquired more than 400 acres of mostly wooded property over the last 45 years. John and Carolee have opened their land to many others, allowing family, friends, and neighbors to snowmobile, hunt, hike, horseback ride, and bird-watch along their 5½ miles of trails. John has also become involved in a number of landowner organizations over the years including the American Forest Foundation's Tree Farm program, the Central Minnesota Small Woodland Owner Association, which he joined over 20 years ago, and the Minnesota Forestry Association, where he was the local Brainerd chapter president for 10 years and the unofficial photographer. I tend to take lots of photos," he says with a grin. More recently, John has begun attending meetings for the Minnesota Forest Resources Council's North Central Landscape Committee. He also sits on the Minnesota Forest Stewardship Committee as a private woodland owner representative, and he has joined his local Northwoods Forestry Cooperative. 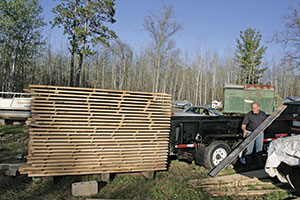 John cites many benefits to his involvement in these various groups. For example, the Central Minnesota Small Woodland Owner Association organizes field days on landowner properties—
including John's in 2010—and connects private landowners to forestry professionals when landowners wish to harvest. "They're a good supportive network," he says. "It's a valuable resource even before you have any logging done, or if you want to have some planting done." John attends workshops and tries to share what he has learned with other landowners in the groups. He benefits from learning from others, noting: "You meet people who oftentimes have expertise in different areas" and "You're around other people who have similar interests and similar goals in mind." Finally, as someone who cares deeply about community, John sees value in the camaraderie and support that he finds through involvement in landowner organizations: "If you become involved, you branch your friendships out, you build relationships with other people that oftentimes can support you… And I think that's really important."