When Bill Skeesick bought his 110 acres near Motley in the late 1990s, he saw a future forest. At the time, less than half of the land was wooded, much of it lying in fallow agricultural land. "As soon as I bought this, I knew that I wasn't a farmer for crops. 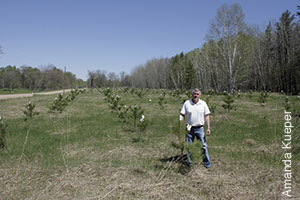 I wanted the aesthetics of the land, the trees, and the wildlife," he says. Today, the entire property is planted in trees, thanks to Bill's work over the last decade-and-a-half. "There's a pleasure that I get personally from watching a little tree grow," he says.

Bill and his family have planted many of these "little trees" themselves. A recent project involved filling in a small clearing in his woods just off of the highway. Bill ordered "improved" trees from the Minnesota State Forest Nursery located in Hubbard County—trees bred for greater wood quality, volume, and heartiness to Minnesota's climate. Bill is vigilant about defending his young trees, and takes a variety of steps to ensure planting success. He advises landowners to prepare the planting site by removing large rocks and any unwanted trees that would compete for moisture and nutrients.

"There's a pleasure that I get personally from watching a little tree grow, ..."

While planting, he stresses the importance of proper spacing and depth. After planting, pest management becomes key. Bill has battled against sawfly infestations, pocket gophers gnawing on his seedling roots, and deer browsing on young trees. To deter deer, he "caps" the top bud with a folded piece of paper and a few staples—a traditional method. However, he'll sometimes make the effort to add an extra cap or two to the sides of the trees for added protection, and he removes caps (once the trees are large enough) to prevent ant infestation. "How many trees are you willing to lose? I wouldn't have went through the time of planning, paying for them, planting them, if I wanted to sacrifice any trees," he said, comparing them to "soldiers in the field." 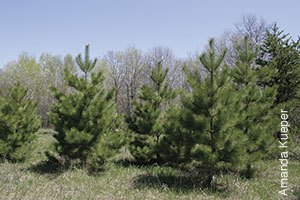 Bill feels that doing projects himself provides him with more control and flexibility, as well as enjoyment. "It's fun to be out there and get dirt on your hands. There's something about when you're riding in that tree planter, and that plow lathe is turning that soil up and you're putting the trees in there; it makes you feel you're connected with the earth I guess." However, Bill has contracted tree planting work as well including a 14,000-tree planting of jack and red pine in 2005. "I didn't want to have to do that much work myself," he said of the undertaking. However, Bill did supervise the work done on his property, saying he believed in being a "visible" landowner. For new woodland managers, being present during contract work can provide valuable learning opportunities, he notes: "If you don't have experience, you might want to hire it done that first year and watch how it's done. Be out there...ask questions. 'How come you're putting the planters this deep in the ground?,' 'How fast should I go?,' 'What is the ideal time of day?' You need to watch. Once you get the experience and you feel comfortable that you can handle it, then go for it."

Bill also advises consulting with a forester while planning projects, and "don't go too big too fast," especially if you plan on taking care of the trees yourself. Finally, he advises attentiveness's a woodland owner: "Watch, watch, watch. Keep an eye on your trees."