Dave Jacobson's 160-acre farm has been in his family ever since his grandparents arrived from Sweden to homestead the land in 1885. Dave's parents moved to the farm with their young family during the Great Depression in 1935 when Dave was only 2½ years old. The family managed to eke out a living during those hard times and keep the farm, which Dave purchased in 1970. In 1992, after he retired, Dave decided to make some big changes. 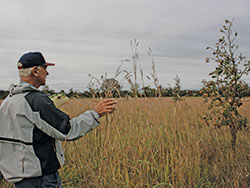 Dave's farm is located along the western edge of the Hardwood Hills, where the region begins to transition into oak savanna and prairie. "We're right in the junction of the big deciduous forest. Conifers start just north of me, and then the prairies are over here. It's a juncture of all three. "Recognizing his land's ecological potential, Dave decided to restore his farm into a variety of natural ecosystems. Shortly after moving back to the property, Dave called a meeting at his home to discuss his vision. "I contacted the U.S. Fish and Wildlife Service, the DNR, county agencies, and anyone else who I thought may be interested in this idea." Many were skeptical—they had heard this story before. But one person latched onto the idea, "You know, I think you're serious about this," he'd said. Over the next 10 years, Dave proved just how serious.

Working with the Fish and Wildlife Service and the DNR, Dave slowly converted his agricultural fields back to native central Minnesota vegetation—restoring former wetlands, planting prairie and savannas, and expanding his pre-existing woodlot. His land includes six ecosystems: tallgrass prairie, short grass prairie, 30 wetlands, a 25-acre woodlot, conifer savanna, and oak savanna. It was no small task. Dave did much of the labor himself, though sometimes his family helped. "I fooled my oldest brother and his son into helping me when they were on vacation here from Oklahoma to go fishing," he jokes. Dave also had some financial help with his project. In addition to providing advice and information, the agencies Dave worked with provided cost-share funds to cover part of the expense for his new trees, and for seeds and soil preparation work for his prairie grass restorations. He encourages others to seek out these opportunities as well. "Contact every possible resource for funding on every level: national, state, and county," he says. "Would I have done it without those funds? I think so, but it would have taken me twice as long and it would have cost me twice as much."

Dave's land is now an educational tool. School children of all ages frequently come for field trips to tour the "friendly forest," as he calls it, and his restored wetlands and prairie. Dave wanted to make sure that future generations could visit the land too, so in 1996 he acquired a conservation easement with the Minnesota Land Trust. The sign posted near Dave's home neatly summarizes his hopes and dreams for his land: Protected Forever. "My top goal is to make sure that this property stays this way forever," he says. "This is my footprint. This will be something other than a name on a tombstone?it represents my lasting legacy."