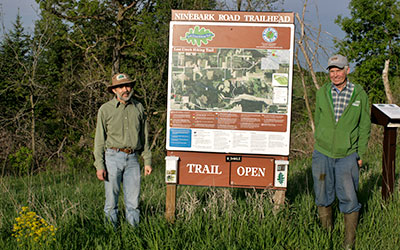 "We just enjoy nature and the outdoors," says Bill Bailey, referring to the reasons for managing his family's farm in Chatfield, Minnesota, which has been in the Bailey family for nearly 100 years. "And if we own it, other people cannot build houses on it." He and Tim Gossman laugh. Tim and his wife, Susan, own the farm adjacent to Bill's. "You make your own best neighbor, right?" chides Tim, who adds, "He makes a good neighbor to me as well."

Tim and Bill own approximately 400 total acres of woods between their farms, and they share about a mile of property line. "You see that woods up there?" Tim points, "That's our north line. Those trees that you see past the field are Bill's." The two neighbors share more than a common border, they share common goals and values for their land as well, including belief in the importance of biodiversity, woodland management, and building good trails. This last belief led Tim, Bill, and others to cooperate with the Fillmore County Soil and Water Conservation District (SWCD) to form the Lost Creek Hiking Trail, a 6.35 mile trail that passes through a mix of public and private land, beginning in the city of Chatfield and crossing Lost Creek before ending at Ninebark Road. The trail is open to the public year-round (with the exception of firearm deer hunting season). "Several of us got together and thought, 'We have this land that is nice, and we think people would enjoy it. How could we share our land with folks?'" says Tim.

The Bluff Country Hiking Club, LLC was created as a host group for the trail's landowners and for non-landowning members who were interested in helping maintain the trail. "Instead of just calling it the 'Lost Creek' Hiking Club, we decided to go with 'Bluff Country' because we thought maybe there are other people who would want to do something similar," explains Tim. The club has two main goals: to provide exercise and enjoyment for trail-users and to educate about the sustainable woodland management practices visible along the trail. For this second goal, the club once again joined forces with the Fillmore SWCD to install numbered signs along the trail. The 25 or so signs point out woodland management practices that the trail's landowners have implemented, as well as interesting natural features. For example, a hiker can see examples of woodland stand improvement, wildlife trees, invasive species control, clear-cut harvests that have grown back, and unique geological features such as a limestone bluff, a sinkhole, and a 'blowhole' that emits steam in the winter. Brochures with descriptions of each numbered site are located at either end of the trail. "We regard it as kind of a permanent field trip," says Tim, noting that hikers can go to the Fillmore SWCD website to get more details about each numbered location.

The club holds monthly meetings to discuss activities they'll host on the trail. Past events have included bird and wildflower hikes and an annual trail run. They also give tours to explain the various woodland management practices along the trail, sometimes with partner organizations like Fillmore SWCD or Zumbro Valley Audubon. "I show them what practices are presently being done there, what practices were done in the past to make it possible for that to be, and then some ideas of what more should be done," says Bill of a recent tour. Bill says they try to encourage folks who already know quite a bit about forestry to join the tours too. "We find in a group that people are sometimes reluctant to ask a question of the presenter, but there is somebody else in the group they will ask. And you can get a lot more education done by having other people that they trust talking to."

Along the trail, the forest floor is a sea of purple wild geraniums, here for just a short time to replace the hepaticas and trout lilies that have begun to fade. Tim searches a bit and finds a pair of delicate, perfect yellow lady's-slippers in full bloom. To preserve it, they carefully dug up and moved the rare plant before the trail went in. "Do no harm," Tim advises. True to this philosophy, the club installed anti-erosion features when the trail was built, which the two neighbors point out. "You have drainage points from the trail so the water does not continue to run down the trail," Bill explains. Bill and Tim are hopeful that others may repeat the Lost Creek model in their own area. "There was a group of landowners that approached us that live over by Cummingsville, and they were thinking of doing something similar," Tim mentions. He gave them some advice for getting started. Ultimately, Bill and Tim see carefully planned, well-maintained trails as an essential tool for woodland management. "Put in trails on your farm. It does get you out and it does help with management," Tim emphasizes, then adds with a laugh: "If you can get there, you'll do it; if you can't, you won't!"

To get details about each numbered location, visit fillmoreswcd.org