Anyone who comes upon Doug Swanson's maple syrup shed for the first time might be a bit confused about how to get inside. The structure, which Doug built himself, is made almost entirely out of recycled doors! 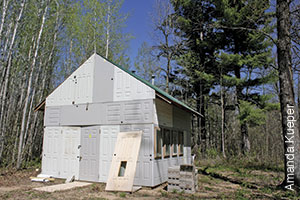 Inside the unusual building, Doug keeps a rusty 255-gallon fuel barrel that he has converted into a wood stove, an old 40-gallon commercial stainless steel frying pan, stacks of clean frosting buckets that he acquired from bakeries, and a variety of other odds and ends that he uses to make the syrup. "It's a backwoods operation," he says with a smile.

Doug didn't know he'd be making syrup someday when he and his wife Rhoda bought the 120-acre woodland in 1976, just that the place suited them well: "It had trees on it...it was relatively wild." But about six years ago he helped a co-worker collect sap during a particularly heavy-flow year and "became a little bit fascinated with it." He decided to tap a few of his own trees, getting a couple quarts of syrup in that first effort. "It was wonderful, and I thought, 'I should try doing this." "Now he taps about 100 trees each spring, setting his taps in early April and collecting and boiling sap beginning in mid-April. During heavy flows, he might collect 100 gallons per day, leading to long days of boiling in the door-covered sugar house, feeding the old fuel barrel boiler with firewood from his land and scraps of dimension lumber from a nearby truss-making facility. "You get a little swept up in it. You have to have the time," he says, noting that he never stores the sap for longer than three days to prevent spoilage. Doug boils the sap in batches to avoid overcooking it, boiling it down first in his large frying pan before moving the concentrated sap to the shed's range stove to finish it. The process creates a lot of steam. "The paramount thing is, don't do this indoors," he cautions, "unless you want to repaint the house."

"It allows me to be out in the woods for extended periods of time. In the spring, if you're here when the snow starts to melt off and the early spring flowers start coming up, mingled in the snow patches...it's energizing."

The finished product seems to be worth the effort. "Some of it's amazingly good. I've been complimented with it being the best syrup people have had," he says. Despite its high quality, Doug doesn't sell his syrup. "I don't want the job. Too many things become jobs if you let them," he says. "I do it for the flavor, and I do it for the fun, and I do it to give it away. People are usually very happy to get it." Doug also enjoys the natural setting that sapping trees provides: "It allows me to be out in the woods for extended periods of time. In the spring, if you're here when the snow starts to melt off and the early spring flowers start coming up, mingled in the snow patches?it's energizing." He has also experimented with other types of sugar production including beekeeping and, for the first time this year, making birch syrup—though perhaps not too successfully for this latter venture. "I made 10-plus pints of totally inconsumable stuff! It's horrible!" he groans. "But I have to try it again."

According to Doug, making maple syrup is something anyone can do as long as they have a few maple trees. "Ideally you would have a wonderful forest of sugar maple. It's not necessary. You can make syrup from all of the maples," he says, noting that he has red maple in his woods, not sugar maple. "You can do it really, really simply with used, clean milk jugs and CPVC pipe...It's quite inexpensive just to explore it, and then you can decide if you want to spend more money and more time doing it," he suggests. "Start very small. Try to tap three or four or five trees, and shoot at getting maybe a half a gallon of syrup," he advises. "And then you'll be hooked." 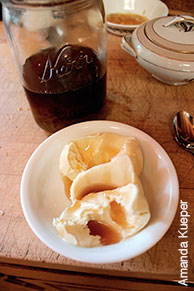 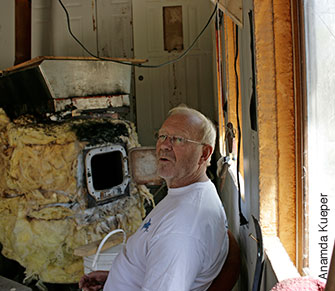