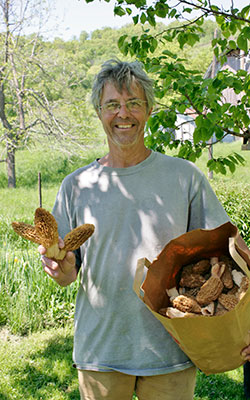 Larry Gates' woods were far from perfect when he bought his 310-acre farm, having endured decades of heavy livestock grazing. But from the top of a narrow "hog's back" ridge that winds through the property, peering down over the rolling, tree-covered hills of the East Indian Creek Valley, it's easy to see why he made the purchase. "It was a place I could work on," he says.

Larry grew up in a farming community near Northfield, Minnesota, and spent his childhood exploring farms that he describes as "bountiful" in their natural riches. "I'd go out there to hunt, fish, and see all kind of stuff happening," he says. But as the decades passed, Larry watched the agricultural landscape of southeast Minnesota change. Farms became larger and less diverse in what they grew, while water quality worsened and native wildlife began to fade from the farm setting. Concerned for the landscape he loved, Larry wanted to show that food production could be both sustainable and profitable. He named his farm "Ours for a Short Time," as a reminder that he and his family were only temporary stewards of the land. "When I moved onto this farm, we were real interested in being able to demonstrate different ways to use the land and still achieve these ecological functions. So I was always interested in wild harvesting."

In addition to growing fruits and vegetables, Larry forages many kinds of wild edibles from his woods, which he sells at farmers' markets and to local restaurants through a grower's cooperative called the Southeast Minnesota Food Network. His product list has included everything from well-known favorites like blackcap raspberries and morel mushrooms to lesser-known delicacies like fern fiddleheads, dryad's saddle mushrooms, and even stinging nettles! "I like the nettles. They're easy for me to harvest, they're abundant, they're good for you, and they come on early in the season. They're fantastic." Larry notes that the best nettles grow in the partial shade of a woodland setting where they can be harvested from spring through early fall. Importantly, nettles lose their sting once they are cooked. "Just wilt it in the steamer, and add a little bit of lemon juice, butter, salt and pepper," he says, adding that "in spring of the year, it's just great to have a green."

Larry has spent the last few weeks in his woods hunting morels. "Look for the dead elms. It's not exclusively dead elms, but if you've got them, it's the dead elms that are still retaining their bark," he advises. Spotting morels takes practice and patience. "You develop a search image for it, to almost the exclusion of anything else, which is unfortunate," he says with a grin. Even seasoned mushroom-hunters can get stumped sometimes though. Larry says there are times he will be searching high and low with no luck. "Then I'll see one. Then there's 10! It surprises me how this still can happen." He cuts the mushrooms at ground level and inspects them for ants before bagging them. Morels can be dried, frozen, or cooked fresh. Larry likes sautéing them with garlic and onions, thickening the sauce with wine and flour, and serving the savory mixture over crusty toast with fresh steamed asparagus: "It's hard to find anything better."

Larry hopes that more farmers and other landowners will learn to see value in their woods, and he sees foraging as a way to build that awareness. "You're learning to look at the woods differently. You see all kind of neat stuff if you're out there paying attention." Larry enjoys sharing his passions for forests and local food with others. He has cooked lunch for the Southeast Landscape Committee of the Minnesota Forest Resources Council meetings with ingredients that he's grown or gathered from his land. "I always liked the idea of representing this stuff as close to home as possibly," he says. For Larry, good food leads to good relationships, which leads to working together to get things done on the landscape. When it comes to building trust, he says: "Food always works."