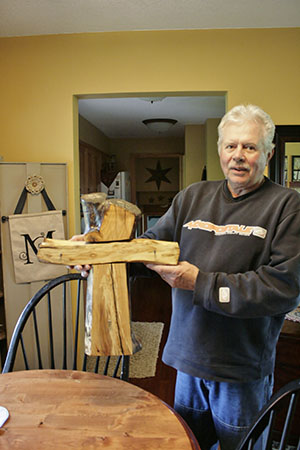 The evening sunlight filters in through a nearby window, casting a golden glow over the sawdust‑covered contents of Ron Maas’ woodworking shop: a planar, a couple of mechanical saws, lumber, and dozens upon dozens of handmade wooden crosses of all different pes, sizes, and species. “I’ve used red oak, black walnut, cherry, red cedar, ironwood, maple, pine, white oak,” he lists off. “Oak is a favorite to work with. I really enjoyed using the ironwood because that has uniqueness to it too. I just liked the different patterns in the wood,” he says, turning one of the crosses over n his hands, “and it’s just durable as can be.”

The first cross that Ron ever made—a gift for his wife on Good Friday—came from a black walnut tree he planted himself. Ron has planted about 9,000 trees on his 67‑acre farm, which was mostly field when they purchased it in the mid‑1980s. Most of these trees are oak and walnut that Ron planted in the hopes of growing high‑quality lumber as “a savings account for the kids when I’m gone.” He has managed the trees vigilantly, calling himself “an absolute nut” about weed control—keeping the grass out to free up resources for the trees. He also prunes the trees to encourage their upward mobility. “You need to manage what you’re putting out there,” he says.

Ron describes his motivation to begin woodworking as “just kind of a whim.” “It was nothing serious,” he recalls. “Just, ‘I think this is what I’ll do.’ And I did it, just to try it out, and then it blossomed into quite a bit of different stuff.” Interest in woodworking runs in Ron’s large family—4 of his 11 siblings are carpenters. As a gift for his siblings, Ron made them each a cross from a spruce tree cut from their family homestead, a mile down the road from Ron’s current home. 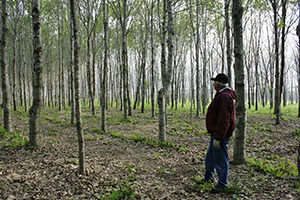 Ron says he uses a fairly simple method to make the crosses. Starting with a small log or a piece of pruned limb, usually around 16–24 inches long, he runs it through his table saw to “true up” the sides. “Then I’ll start running it through the planar and see what I get,” he explains. “Sometimes when you get down in there you like what you see, and sometimes you don’t. Most of the time it turns out pretty good.” Ron creates the two planks for the cross with his planar and connects them with a half‑lap joint that he carves out with his radial‑arm saw. “And then I’ll glue the center and put a screw in from the back so it doesn’t come apart. Put a hole in the back to hang it, put some polyurethane on it, and off we go!” Not all of his pieces are smooth and polished though—sometimes he leaves the bark on for a more rustic look. “That’s kind of fun. You try to pick out the character of the piece before you put stuff together.” Ron cautions against creating pieces from wood that has not fully dried out—he has had t ists form in some of his pieces as they finish drying. “If you could leave the lumber to sit for two, three years, you’d be ahead of the game as far as twisting goes.”

Ron has dabbled in a few other woodcrafts as well: a shelf for their radio, a few knick‑knacks for the kitchen table. “I don’t have any real fancy tools, so I gotta’ do basic stuff,” he says. He is interested in expanding someday though, perhaps into woodturning: “I would like to get a wood lathe and do a little tootin’ around with making bowls or something like that.” He may try selling some of his work as well. He has marketed a few of his crosses in a local craft store, but says he’d rather try doing it himself once he retires. Whatever the specifics end up being, Ron intends to spend more time in his woodshop. “It absorbs your time, and it feels pretty good. Even this little thing right here,” he says, gesturing to a napkin holder he made, “it’s kind of nice to see that you did that. It’s not dovetail joints or anything, but the bottom line is you know you’ve got something that’s quality, and it’s gonna’ last. I like the idea of solid wood. There’s something to be said for the real McCoy."