Payment in Lieu of Taxes 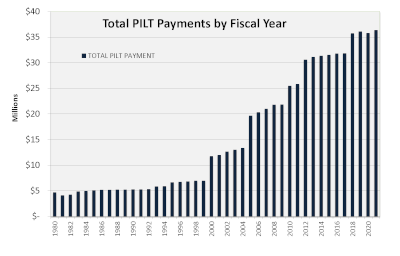 Does the state compensate counties for the loss of tax base from state ownership of land?

The answer is yes. It occurs through a state program called Payment in Lieu of Taxes (PILT).

The concept of paying counties to offset tax loss from state-land ownership goes back to the 1930s, but the modern PILT aid program began in 1979. The amounts of these county payments, how they are calculated and distributed, and other details are written into state statutes (sec 477A.10).

The state Department of Revenue annually distributes more than $35 million in PILT payments to counties. Those payments are further distributed to townships and local school districts.

County-by-county details about the payments are available from the Department of Revenue.

What is Payment in Lieu of Taxes (PILT)?

The Legislature created this local government aid program to compensate counties and other local government units for the loss of tax base from state ownership of land. It also created PILT to help the disproportionate impact of state land ownership in counties with large public-land bases. While PILT payments to counties began for some lands as early as 1933, the Legislature created the modern PILT program in 1979. The aid program is written into state statute in chapter 477A.

What are the annual state payments to counties?

In 2021, the state paid approximately $36 million in payments to counties. The Legislature sets PILT rates and regularly reviews the calculations used to determine the payments. The Legislature also adjusts payments upward when appropriate. In 2013, the Legislature increased PILT payments by 15.5 percent.

Does the money go to just counties?

Does PILT adequately compensate counties for loss of tax revenue?

Legislative Auditor reports have not been completed since 2010. The DNR is not aware of counties who have passed resolutions in support of PILT.

Who makes the payments and when?

What is the range of the payments?

What kind of state lands does PILT apply to?

PILT payments are made on many different classifications of public lands. They include DNR-acquired lands, state forests, consolidated conservation lands (known as “con-con” lands, transferred to the state early in the 1900s), state parks and recreation areas, scientific and natural areas and wildlife management areas. They are also paid on DNR-managed lands such as school trust. More information on this topic can be found on the Department of Revenue website.

Does the state also pay PILT for tax-forfeited lands that counties manage?

Are payments made on all DNR administered state lands?

Yes. The state pays PILT payments on all state lands, even those that would otherwise never be developed or provide private-property tax revenue (e.g., large, inaccessible peatlands).

How are payments calculated?

Different land types have different payment rates. Payment rates are largely determined on whether the land was on the tax rolls when the state acquired it. For example, the payment for lands purchased or donated by private parties is the greater of $5.133 per acre or ¾ of 1 percent of the appraised value of all such lands within the county. Most lands that were acquired from other governmental entities and county administered tax forfeited land are paid at $2 per acre.

Why do PILT payments for certain lands vary from county to county?

It’s because land values and types can vary significantly in different parts of the state. An acre of swamp in northern Minnesota will not be assessed at the same value as an acre of prairie land in the agricultural part of the state.

How often do counties re-value their lands for PILT payments?

Can counties spend the PILT payment at their discretion?

No, distribution is governed by law and PILT is primarily used for property tax levy reduction.

Has the Legislature ever reduced or failed to fund PILT?

No. While the Legislature has reviewed and modified the PILT laws, it has never reduced the overall payment or failed to fund PILT.

Do counties receive other payments from the state for state land?

What is the source of PILT funds?