Lake sturgeon studies in the St. Croix and Kettle rivers 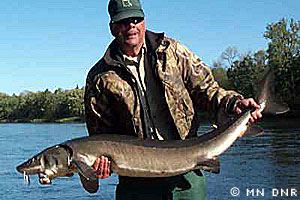 In the early 1990's fisheries managers at the Hinckley area office began to investigate the status of lake sturgeon populations in the area, particularly in the Kettle River. There were concerns that the numbers of lake sturgeon were declining; anglers reported seeing fewer large sturgeon, and fish population assessments on the Kettle and St.Croix rivers showed few sturgeon. At the time very little was known about the life history and distribution of lake sturgeon in area river systems. To find the needed information, DNR Fisheries personnel in Hinckley applied several study methods including tagging (mark and recapture) and radio telemetry.

Why is tagging a useful tool in studying fish populations? Tagging helps biologists recognize individual fish and track information such as migration and growth rate as the fish are recaptured in subsequent years. It also allows biologists to calculate estimates of the total number of fish living in a lake or river system. 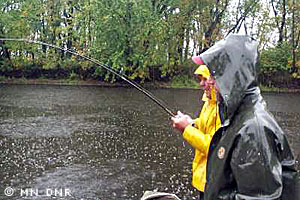 Tagging of sturgeon began in the Kettle River in 1992. Since lake sturgeon were not sampled well by the usual river sampling method, electrofishing, biologists needed to find a different way to catch these fish. Trap nets, trammel nets, wide mesh gill nets, and seines were tried, but were ineffective and difficult to handle in river currents. Fisheries workers even resorted at times to "hand-to-fin combat", wading in the rapids where sturgeon gathered to spawn and catching them by hand.

As it turned out, the most effective way to sample lake sturgeon turned out to be the old fashioned hook and line. The advantages of sampling by angling are many: 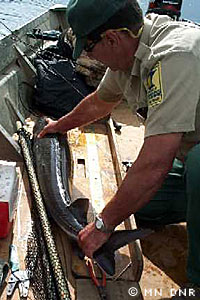 Once a sturgeon is captured, the weight, length, and GPS coordinates of the site are recorded. If the fish has already been tagged, the tag number is recorded. If the fish is not tagged, a small plastic coated tag with an identification number is attached to the base of the dorsal fin. Before releasing the fish, biologists remove one of the pectoral fins. By examining the spine in the pectoral fin the age of the fish can be determined. A thin section of the spine is cut and examined under a magnifying scope. Visible in the section are rings, somewhat like the growth rings in a tree trunk. By counting the rings, biologists can determine the age of the fish.

As of the fall of 2003, fisheries personnel in Hinckley had tagged a total of 571 sturgeon (439 in the Kettle River, 39 in the St. Croix River, 40 in Cross Lake, and 53 in Pokegama). The largest sturgeon caught was 63.5 inches and weighed approximately 56 lbs. The oldest fish aged so far has been 43 years. Biologists have recaptured 370 sturgeon, with 175 sturgeon being recaptured multiple times. One particular sturgeon has been recaptured 12 times. Information from this study has given biologists and idea on growth, age structure, length frequency, condition, total mortality, and estimated population size.

By comparing the numbers of tagged and untagged sturgeon caught in any given year, and applying mathematical formulas developed by fish and wildlife statisticians, an estimate can be made of the number of sturgeon in a particular body of water.The following table shows population estimates (Schnabel method) for lake sturgeon in the Kettle River through the year 2002. 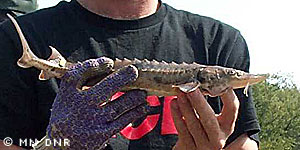 The studies have also provided some valuable information about the effects of the removal of the Sandstone dam that occurred in 1995. The dam removal had both positive and negative implications for sturgeon in the river. When the dam was removed, years of accumulation of sediment washed downstream, covering known spawning sites and filling in important deep pool habitat. However, the entire range of the Kettle River is now available for sturgeon previously isolated by the dam. Sampling in 2003 revealed that sturgeon are now migrating upstream of the former dam site.

So what is the outlook for sturgeon in the Kettle River? Right now the future appears bright. With regulated harvest, cleaner water, and more access to habitat the population of lake sturgeon appears to be stable and growing slowly. Conservation of this ancient species will be dependent on strict control of harvests, maintaining clean water, and protection of important habitat. However, even with these measures, bringing the fish back to historical levels will take decades. Because of this few people will ever have the opportunity to catch a sturgeon in east central Minnesota in the near future. However, if things go right our grandchildren may have a chance to actually catch a 100 pound sturgeon instead of just seeing old pictures.