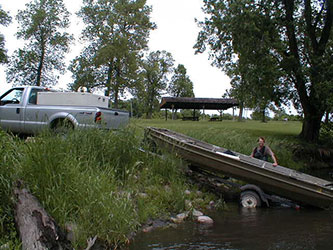 North Fork Crow River Fishery: The fishery of the North Fork of the Crow River is typical of fisheries in southern Minnesota's warm water rivers. Much of the fisheries "biomass" is made up of fish such as carp and redhorse. Because of its broad connection to the Mississippi River and the absence of barriers to fish movement, all of the species captured in the Mississippi River might be thought to exist in the North Fork of the Crow. In their sampling on the Mississippi River at Monticello, Excel Energy biologists have recorded the presence of 41 species taken during their seining. During the 2012 fishery assessment, the most recent work done by the Sauk Rapids Area Fisheries Office, a total of 1,372 fish representing 36 species were captured by electrofishing and set lines.

A directed effort was made to capture channel catfish with trot lines. The abundance (0.28/hook day) was higher than that found in the Minnesota (0.11/hook day) and Red Rivers (0.17/hook day).

Angling pressure appears moderate. Bank angling opportunities are generally limited to bridge crossings. Popular places to angle are at the confluence with the Mississippi near Dayton and where the South and North Forks join near Lake Rebecca County Park. Wright County Parks offer excellent shore fishing sites. Walleye are the species most frequently sought by anglers but channel catfish, northern pike, crappies, and bullheads are other species commonly caught. Large northern pike are commonly taken from Cook Lake, a winterkill type lake within the floodplain at river mile 31. Channel catfish are taken generally upstream of Rockford although abundance was noted throughout the river.

Crow River Guide: Here are some pages which might help the first time canoeist/angler. The information has been distilled from fisheries surveys on the Crow River which were fairly technical. A map and photo of each access give the viewer some idea how to reach the site and what to expect on arrival. Fishing and canoeing tips will further enhance the enjoyment. Nine pages have been created, one for each access site that we are familiar with: Dayton, Riverside, Rockford, Crow Springs, Humphrey, Anderson, Albright Mills, Wildlife and Betty Mason. Unfortunately, the coverage only includes Wright County. Each page will highlight different aspects of the fishery so that a reader will have a complete picture after looking at the entire series.