Smallmouth Bass Movement and Habitat Use In the Upper Mississippi River, St. Cloud to Coon Rapids 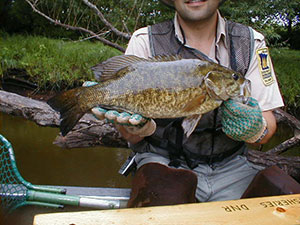 Radio transmitters were surgically implanted in 30 smallmouth bass captured in six locations, on a 96 km reach of the Mississippi River between the St. Cloud and Coon Rapids Dams. Movements were documented over a 12-month period, and habitat use associated with each fish location was characterized. Over 2000 individual fish locations were recorded during the 12-month period.

Radio telemetry was a valuable tool in determining behavior and movement patterns of larger smallmouth bass for this area of the Mississippi River. We observed several smallmouth bass that crossed the regulation boundary in Dayton. A better understanding was gained of the influence of artificially increased temperatures due to a nuclear power generation and manually adjusted flows from hydroelectric operation.