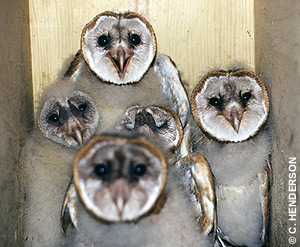 This medium-sized owl is rare in Minnesota, but it is occasionally spotted on farms and in wooded areas, mainly in the southern part of the state. If you see a ghostly white figure swooping around abandoned buildings at night, it might be a barn owl looking for rats and mice.

General description:The barn owl has a white, heart-shaped face and long legs. Unlike most Minnesota owls, it has dark, not yellow, eyes.

Color: You can tell this light-colored owl by its white chest and stomach, and golden to rust-colored back.

Barn owls nest mainly in buildings, tree cavities, and caves. The female lays 5 to 10 eggs, depending on how abundant food is. The better the food supply, the more eggs she will lay. The eggs hatch about 29 to 34 days after they are laid. The young fledge about 56 to 62 days later. Barn owls can have two families in a single breeding season.

Barn owls are found in farmland. They are most likely to occur in the southern part of the state, though they have been spotted near Duluth and in a few other northern Minnesota locations over the years.

In southern states, populations have declined over the years as undisturbed fields have been plowed up for farmland or house construction. Barn owls have always been extremely rare in Minnesota. Barn owls may not be shot, captured, transported, or owned without a permit.

Like other owls, the barn owl has eyes that face forward. This gives it depth perception, the kind of vision you have when you look through two eyes instead of one. Also like other owls, one of its ear holes is higher than the other. This helps it identify the source of a sound, such as mice rustling in the grass.