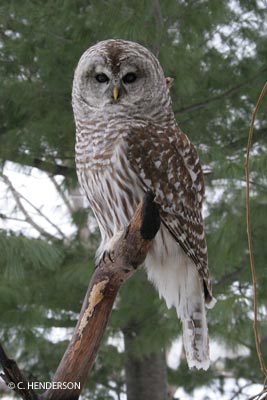 General description:The barred owl is a medium-sized grayish-brown bird of prey that has a dark ring around its face. It looks similar to a great horned owl, but it is slightly smaller and has no ear tufts. Also, barred owls have dark eyes. All other Minnesota owls have yellow eyes.

Weight: One to two pounds.

Barred owls begin nesting in March. They nest in hollow trees, in abandoned nests of other animals or in nest boxes. The female lays two or three white eggs, which hatch in 28 to 33 days. The newly hatched young are covered with fine white down. Young barred owls leave the nest four to five weeks after hatching.

Minnesota's barred owl population appears to be stable. Like all owls, the barred owl is a nongame bird, which means it can't be legally hunted or trapped.

A barred owl's right ear is higher than its left ear. Hearing from two different angles helps it pinpoint the location of prey.