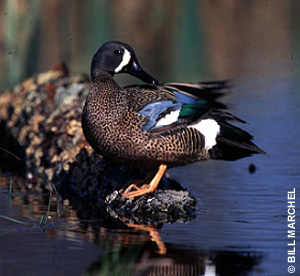 This is a small, fast-flying puddle duck that flies in flocks and is a common breeder throughout the prairies of Canada and many Midwestern states, including Minnesota. Sensitive to cold weather, blue-winged teal migrate south in late September and early October, much sooner than most ducks in Minnesota.

Sounds: A faint "tsee-tsee" call and a high-pitched quack.

Blue-winged teal lay eggs in early June. The nest consists of 10 to 12 eggs laid in grassy fields or road ditches. The eggs hatch in 24 days.

Small- to medium-sized wetlands, small lakes and the back bays of rivers. In the spring, blue-winged teal breed in prairie areas of the United States and Canada, but will fly further north if wetlands are dry. In the fall, they'll migrate south to Columbia, Venezuela, Mexico and the Texas and Louisiana Gulf Coast.

Blue-winged teal have thrived in recent years with wet conditions on the prairies of the Midwest and Canada.