The tiny boreal owl nests in far northeastern Minnesota, and it occurs there and elsewhere in northern Minnesota in winter. People rarely see this owl because it hunts at night.

General description: It has a white-spotted black head and a brown body. This robin-sized owl also has a black forehead, a black rim around its face, and a yellow bill. It has no ear tufts.

Size: The boreal owl is generally 9 to 10 inches long. Its wingspan is about 21 inches.

Color: The body is brown with a brown-streaked white breast. The face is black and white.

Boreal owls begin breeding when they are a year old. The female usually lays four to six eggs in a cavity. She is mainly responsible for incubating them, while the male hunts and brings her food. The eggs hatch about 27 to 28 days after they are laid. The young birds fledge (learn to fly) between 28 and 36 days of age.

These owls eat mainly rodents, and they feed mainly at night. Often they will sit on a perch listening, then dive for the capture when they hear something scurrying below. Sometimes boreal owls store extra food in cold weather, then thaw it later by sitting on it. 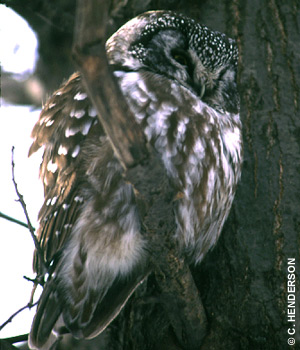 The boreal owl prefers northern forests containing spruce, pine, and aspen. Boreal owls are rarely seen in Minnesota. The first one reported nesting here was in 1978.

These owls are uncommon, but they are not considered threatened. In Minnesota owls may not be shot, captured, transported, or owned without a permit.

Like other owls, the boreal owl has eyes that face forward. This gives it depth perception. The kind of vision you have when you look through two eyes instead of one. Also like other owls, one of its ear holes is higher than the other. This helps it identify the source of a sound. Both of these adaptations help the owl find prey.